+56
Time to get to know a bit more about another core member of the Webroot community - ? (aka Anthony).  He's one of the most prolific people in the Security Industry News forum, as well as being an all-around great guy and helpful community member.  Here's some questions I asked him so we could get to know him better: 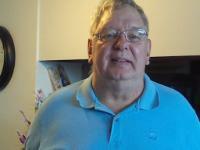 Tell us a bit about yourself

I was born and raised in Cleveland, Ohio and attended a Catholic grade school then graduated from public high school in 1965. I was a musician and played the clarinet and saxophone. During my high school years I played in a band on the weekends and was able to make extra money that way. I wanted to attend the Cleveland Institute of Music however neither I nor my parents could afford the cost.

During this time the Vietnam War was going on and I received my draft notice. I decided to enlist for 3 years in the Army and was assigned to the ASA (Army Security Agency). I had the good fortune of traveling to quite a few countries during my tour. I met my future wife in Turkey and in 1968 we were married in Waukegan, Illinois. I was discharged from the service a month later.  We have been married for 47 years and have 2 boys and a girl and 10 grandchildren.

I worked in the office of a transportation company for 45 years.  I worked with computers and watched as they progressed to the Internet. Within the company one of my duties was security and making sure none of our data was compromised by our competition. I trained other new employees on the computer systems and what needed to be done on a daily basis.

How did you discover Webroot and the community?

One of my passions was testing out antivirus software and firewalls and, well, Webroot was on my list.

I had gone to the Webroot web site and browsed around and came upon the forum. I was impressed with the subject matter and responses.

Where do you go to find all the helpful security news that you post to the community?

I searched the web for all the sites that dealt in security news, for which I have compiled a total of 15 favorite web sites to date. I review these sites on a daily basis for news and I work with Jeff to coordinate what he posts and what I post.

Who is your role model?

That is a given for me; it would be the Webroot Community staff and members. I have gained a enormous amount of knowledge and respect for everyone here.

Where is your favorite place that you've visited and why?

That would be the country of Turkey where I met my future wife. Back in 1967 when I was there the people treated me like their own. The food and culture was fascinating. I have some warm and fond memories of that country.

What image is your community avatar from?

I chose the image for the forum avatar as it struck me to a degree of boldness and strength. (interviewer's note - turns out it is a character from the video game Baldur's Gate)

Thanks for being a key part of this community and helping us learn more about you, Anthony!

Userlevel 7
Well done Anthony!  I really enjoyed this.  Thank you for taking the time to share a bit of yourself with us 🙂
New to the Community? Register now and start posting! "If you don't learn something new every day, you need to pay more attention. I often get my daily learning here so grab a chair and stay a while!" WSA-Complete (Beta PC), WSA Mobile (Android), WSA Business Mobile (Android) WSA-Endpoint (PC- Some of the time.....)

Very nice to know all of this about you! This is nice to see who you are!

You are very valuable to us on the community.We enjoy all the SN that you post every single day.;)

Sounds like you have a strong happy family especially with 10 grandchildern and to be married 47 yers is also very impressive!

Thankyou for your time and letting us all know who you are and your background and interest.

Great to know you a little better!  Nice interview and interesting history.

Keep on doing what you do.

+53
Thank you Anthony. It is great to know about you and life.
10 grandkids, crikey, I bet they help to keep to fit don't they. And 47 years of married life, I have a long way to go to catch up with you.

Userlevel 3
Ah, I now understand that 67 was a big year. Actually, there are still American servicemen in Turkey to this day. But you are among the original 🙂

Userlevel 7
It's great to know more about the good hearted and alacrious Anthony.:)

Userlevel 3
Sorry for reposting but I still find the story cute. I am still new to all this security industry stuff so what I do enjoy doing for now is getting to know the members.

Hi all how's everyone doing.
A

Userlevel 3
The only reason I reposted tho is because Gold posted and I am simultaneously trying to get to know Antus and Gold. It is a game of follow the manual. This website is an instruction manual for Greatness. But I am not authorized to go into detail my enhanced perception of Internet activities. Cough Cough meditation