Userlevel 6
I discovered Webroot by sheer accident.  I have been a Norton user for many years.   About a week ago I upgraded to Norton 360 Premier.  With Norton, I am all too familiar with the amount of time it takes to complete routines, such as scans and backups, but I do consider it to be good software.

While doing some research for the best internet security programs (I did a search on Cnet) I came across Webroot.  The contrast between Norton and Webroot intrigued me, so I purchased Webroot Secure Anywhere Complete.  I wanted to compare the differences between the Norton and Webroot software.  Much to my surprise, I learned that I could run Norton and Webroot on the same machine without creating conflicts.  So, that's precisely what I did ... I installed both programs.

Much to my surprise, they seem to be functioning well, with no glitches or slowing down of processes.  I am told that Webroot is non-intrusive, which allows it to function, and not compete, with Norton.  So far, this seems to be the fact.

However, the speed with which Webroot performs tasks, as compared to Norton, is noteworthy.  As an example, a Norton full system scan takes me about two hours, while a Webroot full system scan takes me about two minutes.  Also, I backed up some files on Norton ( like Webroot, Norton offers 25 gb of backup), which consumed about 12.4 gb.  I then backed up the same files on Webroot and it only consumed about 1.2 gb.  Now, I'm sure I must have missed something, because I find it hard to believe that a Norton backup would consume so much while a Webroot backup would consume so little.*

In any case, the contrast between the two products has been duly noted by me, and I'm sure, as I become further acquainted with both programs, I'll notice additional disparities.

*  I've determined that the main reason my Webroot backup was so small compared to my Norton backup is because I did not backup my "pdf files" on Webroot.  This happened because  "pdf files" were not included in the checklist of items to be backed up.  So, I assumed that "pdf files" would be backed up, when if fact they were not.  I discovered this issue when I compared certain files from my C drive with those that were backed up and noticed lots of omissions, in particular, "pdf files."  I had to enter "pdf files" manually and have now backed them up as well.  I have alerted Webroot of this matter and have suggested that they modify their checklist to include "pdf files."  Actually, given the large number of "pdf files" on c drives of most computers, I'm surprised Webroot didn't include this as part of their checklist to begin with.  Now that I have backed up my entire C drive, it only consumed 9.4 gb on Webroot, compared with 12.4 gb on Norton.  That's a big difference, and I am at a loss to explain why the Webroot backup is so much more efficient, but it is.

Userlevel 6
Hi, Jim.  That's good news, and thank you.  Would you please explain, in this thread, what the issue was?  This is probably a learning process for several of us.

With regard to the Norton error message, I have not been troubled with it since the first incident.  I guess Norton blinked. ;)

BTW, while I have your attention, you may want to take a look at adding "pdf files" to the check list of items to be backed up.  Presently, you have to enter it manually.

Userlevel 7
RWM,
I figured out what the problem was. You'll be able to upload images normally now. Sorry about that!

Thank you for sharing the image. It sounds like if you proceed without uninstalling Webroot, you don't see the message again. I'll see if there's anything else we can do about that message on our end, but I'd suggest ignoring it for now.
/// JimM /// /// Former Community Manager - Now Humble Internet Citizen/// /// Also Formerly a Technical Support Escalations Engineer ///

I responded to your private message and will provide you with an update when I know more. I have seen the standard image uploader and will know more about the version you are seeing tomorrow.
Mike R Social Media Manager

Userlevel 6
Well, TH, this whole thing leaves me baffled.  I think we need a Webroot tech person to sort this out.  Thanks for your input.

wrote:
My pictures are.jpg's.  However, when I capture a screenshot using Snagit I capture it as a Word Doc and then convert it to a pdf.  But s we now know, I can't upload pdf's to this site.  It needs to be in a url format, at least according to the software I have.


I don't I just save them as.png's which is default.

Userlevel 6
My pictures are.jpg's.  However, when I capture a screenshot using Snagit I capture it as a Word Doc and then convert it to a pdf.  But s we now know, I can't upload pdf's to this site.  It needs to be in a url format, at least according to the software I have.

+56
Anytime! 😉 I don't think you can upload pdf's here only pictures?

Userlevel 6
Exactly, as you can see, I can only upload a url, not a pdf.  Also, I have no browse feature.  Now that's odd!

Thanks for the assist, TH. 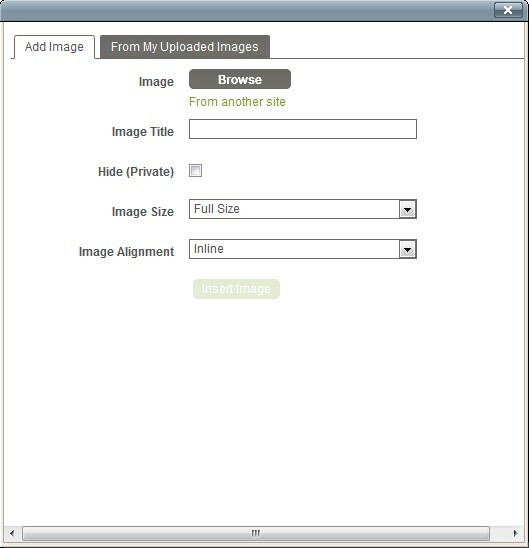 And this is what RWM has. 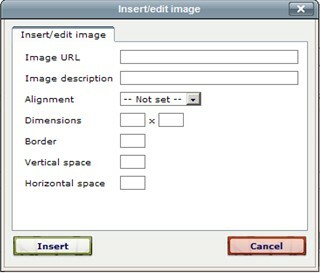 This, by the way, is why I had so many problems trying to upload an image to this thread.

Also, like I said earlier, the Norton error message has not popped up again.  Just that once.  Both systems (Norton and Webroot) seem to be coexisting otherwise.

+56
I would just ignore this error message as Norton just doesn't like to play nice with any other products but you can run it with WSA! 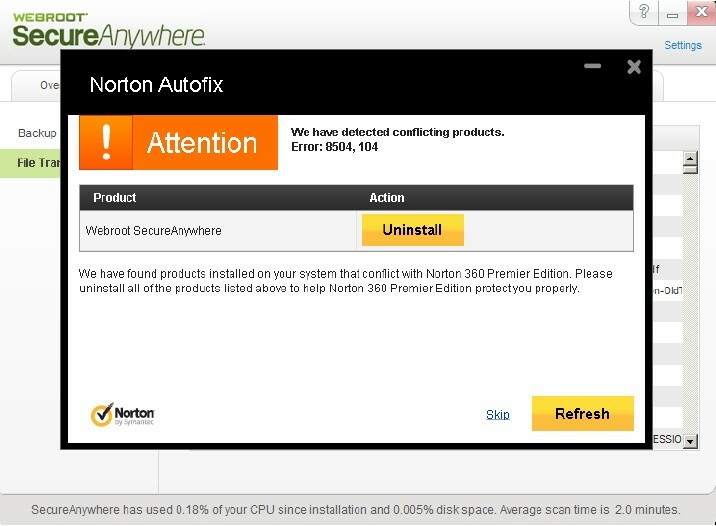 +56
Still no good I sent you another PM.

Userlevel 6
Well, I think I solved the problem.  Please click on the link I provided to see the Norton error message I received relating to the Webroot conflict.  Let me know if you can open it.

wrote:
Let's see if this works.  This is a screenshot of the error message.


I sent you a PM just click on the envelope beside your name at the top!

Userlevel 6
Let's see if this works.  This is a screenshot of the Norton error message.  It invites me to uninstall Webroot because of a perceived conflict.

Incidentally, I did not uninstall Webroot and I have not seen the error message again.

+56
Well if you have Snagit as I do also just take a snapshot and post the picture.

Userlevel 6
TH, I use Snagit. It allows me to take screenshots and convert them to pdfs and Word Docs. I tried to download SnapShot but for some reason couldn't open it.

If you will give me an email address, I will send you the Norton error message as an attachment.

+56
Do you have a SnapShot program? If not you can Download this free easy to use version that I use still most times then you can take a snapshot and upload here as Jim metioned.

Userlevel 6
Jim, it's in Word Doc and pdf format.  I can't upload it the way you suggested.  Give me an alternative way to upload.

Userlevel 7
As long as there isn't any personally identifiable information in the screenshot, you can post it in this thread.  You'd need to use "Reply" instead of "Quick Reply" to see the little picture of a tree icon that allows you to attach an image.

Or, if there is personally identifiable info, or your preference is for going through support, you'd want to use the link in my post above.  We'd send you a utility you can use to gather the screenshot and return it.

I have no intention of uninstalling Webroot Secure Anywhere.  If push comes to shove, I'll uninstall Norton.  I'll let you know if I encounter further problems with either Norton or Webroot by not uninstalling Webroot.  I did reboot the machine and both programs seem to be working well.

BTW, I took a screenshot of the error message.  if you want it I can email it to you.

Userlevel 7
You're probably running into the same kind of issue as Durantash, who posted about it here.

I think what the replies in that thread are getting at is that there is a marketing incentive to pre-emptively label another program as incompatible.

One way of looking at how to market an antivirus product is to make it as compatible with anything else as possible, which makes people who run more than one AV solution very happy.  That's what Webroot does.  If there is an actual incompatibility, we want to know about it, so we can fix it.  If this is anything more than a mysterious message from Norton, our support agents will want to look at that, and I'd advise putting in a support ticket.

Another way of looking at it is that if your customer is running two AV solutions, there is a chance they may like the other one more and go with it.  So there is an incentive there to persuade them into going with yours.  Webroot does not do this, but certain other antivirus providers might.

In short, if there is an actual incompatibility, and you notice any odd behavior, please let us know by contacting support.  Otherwise, if the message allows you to skip uninstalling Webroot, as was indicated in the other thread, you could do that.
/// JimM /// /// Former Community Manager - Now Humble Internet Citizen/// /// Also Formerly a Technical Support Escalations Engineer ///

It looks like Norton and Webroot are not all that compatible after all.

One other thing:  The portion of the Webroot program that asks you to check off the items you'd like to back up does not list "PDF files."  You have to enter "PDF files" manually in order to have those files backed up.  Including the "PDF files" option as part of the checklist would appear to be a very minor correction, and it should be made.
Page 1 / 2