View original
This topic has been closed for comments
F
Same here, would like to gt an idea for planning purposes of when the .19 release will be available. 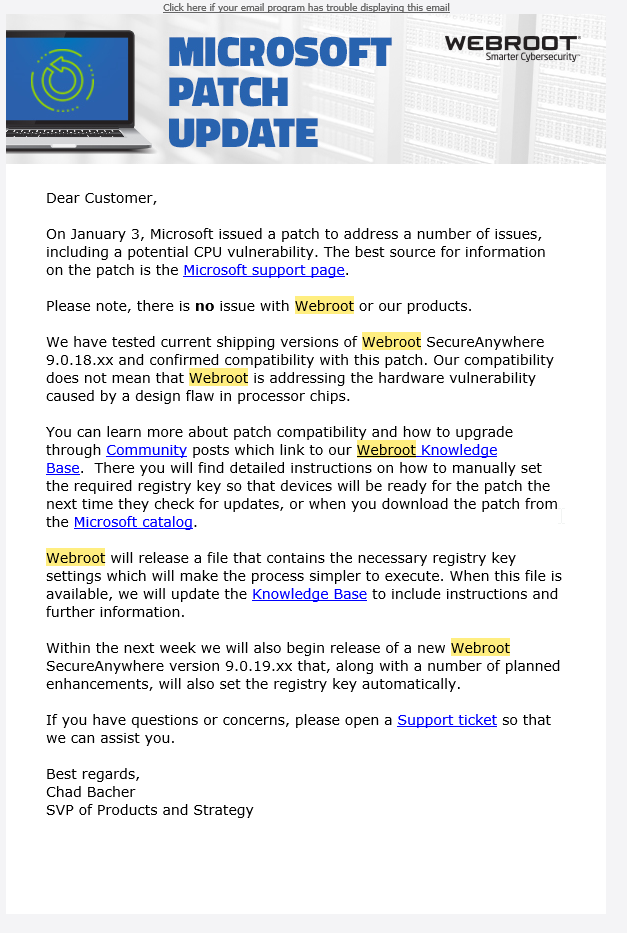 I was completely relying on this and not us having to deploy commands to change registry entries. If this was not mentioned in that notification I would have planned for our own change deployment.
T
In the same boat here.  I have been waiting for this to happen as well.  It's not fun telling executives that we need to backtrack on our response and manually add the reg key to a bunch of workstations/laptops/servers.

Ideally there'd be an initial or "RC" rollout that we could opt-in or -out of on a per-site basis, or at least be able to give our clients a solid date.  Seems like a rudimentary site-level version-control setting shouldn't be too difficult to implement in the web console (if it's not, the next platform re-design definitely needs to be done with an eye towards greater agility).
NOC Engineer, Webroot SME

--
J
The lack of updates in the console, or the ability to simply select from a group machines that need to have the app force-updated is starting to grind on me. It's as if the web console has been completely ignored in terms of updates and feature updates, while the software itself gets stuck at older versions on client machines. This latest failure to communicate when the latest update is supposed to be available highlights the lack of communication between the development team and public relations highlights a serious issue.
L
Webroot's inability to provide timely updates to it's corporate base is really making me think twice about whether this is the right product for my clients.  It really takes a month to come out with an update to fix a rather critical vulnerability?  How long does it take to come out with an update to a really virulent virus or other malware attack?  My clients seem to always be in the last "pool" to get updated (if such a thing really exists).  We want to get the update as soon as it's available, not sit around and wait for whenever the heck our turn is.  Why can't we just get a download link to the 9.0.19 so we can deply it ourselves? My console "resources" tab still downloads 9.0.18.44.  Sad.
B
I am pretty surprised at how lax the response has been.

I know us tech folks hate hearing complaints especially when we have a lot to do already.  I'm hoping that the exploit is just rare, yet sensational-- that's why it was all over the news and we're all antsy to make sure our checkbox is checked.  I hope that's the case and it's not that Webroot is behind the curve 😞