+3
The latest Webroot release 9.0.15.43 with its updated wrkrn.sys file seems to have caused some BSOD's with 2008r2 after our systems rebooted last night.  I was able to delete the file from a repair command prompt and then reboot into normal operating mode.

I have a ticket in with Webroot support about this issue, but I thought my issue should be shared.

Update:  I have talked with an MSP using Webroot who has had the same problem today.  They also report that if you reboot your machine again after Webroot has a chance to reinstall the wrkrn.sys file it will start throwing up BSOD messages again.
Page 2 / 2

The engineering teams continue to work on determining the root cause of the fault and whilst it was proving difficult to reproduce consistently a new built was determined to be the quickest method of restoring service to impacted customers.
Anna - Webroot Sr. Advocate Programs Manager
O
Experienced the same issue yesterday on 3 servers.

When virtual - Boot up the server with only the C Drive.

Windows will create a temp pagefile on C just to work.

Configure the Pagefile to remain on C Drive.

Shutdown and add the additional Disks.
F
Userlevel 2
If this is a fix, can we have a report of what was fixed?  That release notes is more of a notification of a new patch with no new details.

Is there a way to be notified when a new agent version is released so that we may test it?
M
+1 on this.
S
+1 as well
B
+1 as well, would be most useful to have

While we put every release through rigorous testing, in this case a serious issue was discovered after release that was not seen during testing.  Going forward, we are expanding our QA coverage to address an even broader range of customer environments.  We will also improve communication to ensure customers are consistently notified of releases in advance, so they are able to control how they roll out updates in their environments.  Specific details will be announced in the coming weeks.
Anna - Webroot Sr. Advocate Programs Manager
A
I had this issue also. Just resolved it with MS's (paid unfortunately) assistance now.

As with others it seems... our swap file was on a different volume and the machine rebooted itself every morning.
N

Page file on C and on another volume

-n
J
Userlevel 7
, our Escalations Team has reproduced the issue on their SmallBusinessServer.

A validated fix from development will be patched in the upcoming release.
N

-Nic
J
Userlevel 7
Not a problem, we're always listening and willing to help in any way we can :)

+9
Any update on the the status of this release?

Any update on the the status of this release? 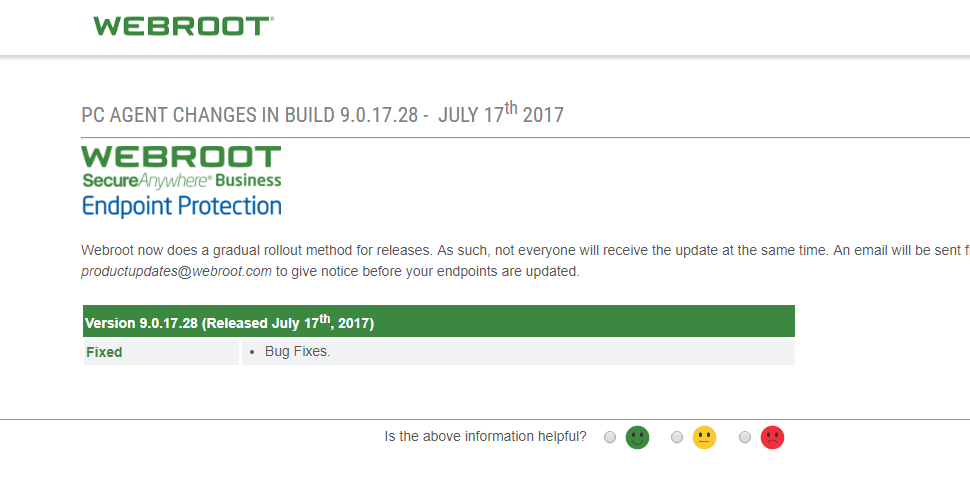