The smart phone market will grow at a compound annual growth rate (CAGR) of 18%, while mobile phone shipments will decline by a CAGR of 9% over the same period. Growth in the smart phone market will continue to be driven by Android. In 2012, over 470 million Android-based smart phones shipped and by 2017 this number will have more than doubled to over 1 billion, giving the platform a 67.1% market share. Over the same period, it is forecast that Apple’s shipments will continue to grow, but at a slower rate than the total smart phone market and hence its market share will fall from 19.5% in 2012 to 14.1% in 2017. ‘Apple’s growth will be curtailed by the fact that momentum in the smart phone market is coming from the low end, and Apple is absent from this segment,’ said Jessica Kwee, Canalys Analyst. ‘Android’s continued dominance is due to the scalability of the platform.’

In contrast to Apple, Microsoft’s market share is forecast to grow from 2.4% to 12.7% over the same period. ‘The scalability of Microsoft’s platform will be critical to its success and it has made progress here by enabling Huawei and Nokia to deliver Windows Phone products at aggressive price points,’ said Kwee. ‘Nokia is the most active vendor in the Microsoft camp and it continues to make steady progress with its Lumia portfolio. It has had some major carrier wins recently in the two largest markets of China and the US, which will help it build momentum in the short term. But longer-term it is the Chinese vendors that are best placed to challenge Samsung’s market dominance. Microsoft already has a relationship with Huawei and ZTE in the phone space, and Lenovo is a major partner in the PC space. These partners will be needed to help deliver the scale that Microsoft needs.’

The outlook for BlackBerry remains positive. Though its market share will remain stable over the forecast period, in real terms its shipments are expected to more than double. But for this to happen, it needs to phase out BlackBerry 7 devices quickly and add BlackBerry 10 devices across a range of price points. In addition, BlackBerry needs to urgently reverse its fortunes in the US and focus on growing its presence in China, as without these markets it will struggle to hit the projected shipment numbers. 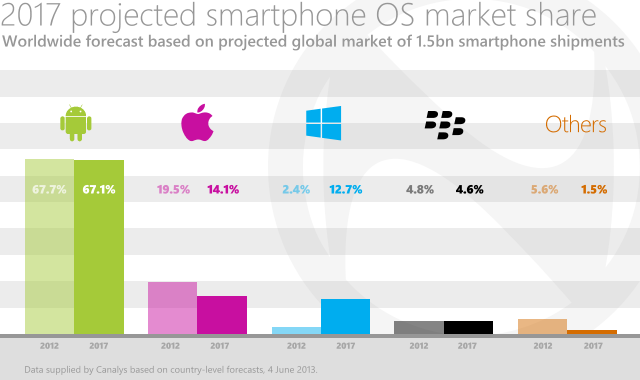 IMHO, I am surprised that they predict the almost same share for Apple and Microsoft.

Anyway it could be of interest of Mr. Michael Malloy - Executive VP of Products and Strategy 😉

Userlevel 5
If this is true I would love to be the manufacturer of the batteries for the Android phones:D:D

Yeah, it can be, time will tell us but be so kind and give us your assessment of the mobile OS shares for future years, in your position you would not be a stranger.

Userlevel 7
Just couldn't agree more with Daniel. WSA for Win OS is extremely needed with all these malware sneaking around.;)