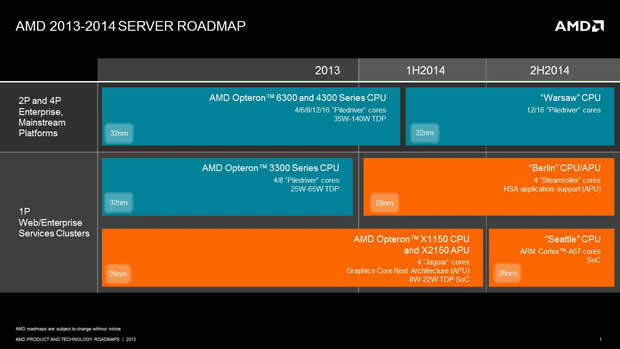 Advanced Micro Devices is dipping into the ARM world.

The chipmaker announced Tuesday that it plans to develop its first ARM chip starting next year. Codenamed "Seattle," the chip is being touted by AMD as the industry's first 64-bit ARM processor from a major chipmaker.
AMD said that the chip will offer two to four times the performance of its Opteron X-Series processor with improved compute per watt. Based on the ARM Cortex-A57 processor, Seattle is expected to run at speeds of 2 gigahertz or higher and will support up to 128GB of DRAM.

Aimed at the server market, Seattle will be the first processor from AMD to use the company's Freedom Fabric technology, which allows more dense computer systems to be integrated directly onto the chip.
AMD said that it plans to "sample" Seattle in the first quarter of 2014 with an eye toward production in the second half.

Source: Cnet.
Be the first to reply!