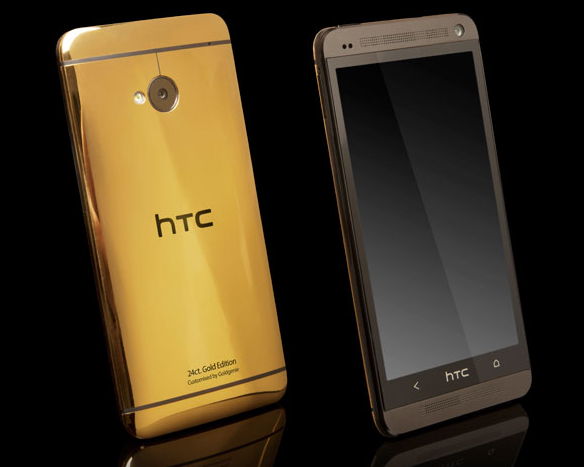 You missed the gold-plated Galaxy S4 already, but orders are now being taken for the HTC One + bling.

HTC and Samsung have each been hoping that their HTC One and Galaxy S4 Android flagship phones will become the gold standard for the latest generation of smartphones, but the customizers at Goldgenie are taking the notion quite literally.
The British company has been selling gold- and platinum-plated iOS devices and BlackBerrys for a while now, but it seems to have decided that the HTC One and Galaxy S4 have finally presented a pair of Android phones worth the deluxe bling treatment.

Given the pace of device development and technological obsolescence, you might think that adding more than a thousand dollars to the cost of a smartphone just to slap some precious metals on it is a little silly, to say the least. But apparently there's plenty of high rollers that disagree with you: The plated version of the Galaxy S4 is already sold out after being available for just a few weeks.
Fortunately for the baller in you, the gold, platinum and rose gold-plated versions of the HTC One were just added to the Goldgenie roster today and are still available for between roughly $3,000 and $3,300.

That steep price tag gets you a SIM-free, unlocked HTC One plated in shiny precious metal, Beats earphones with a remote and microphone, a dock connector, all the normal cables and papers, and it all comes in a "luxury cherry oak finished box."
Also included is the self-assurance of knowing you probably have too much money, but with a nagging voice in the back of your head that questions why you apparently aren't big time enough to spring for a Vertu Android phone with included on-call concierge service (or any of these, for that matter).
If you're still sold on the golden One, you might want to order soon, as apparently even paying a more than $2,000 premium doesn't mean your shipping will be expedited. The Goldgenie site claims orders can take up to three weeks to ship, depending on demand.

Source : Cnet
Be the first to reply!