Userlevel 7
Earlier this year, Huawei impressed us with its super-skinny Ascend P2, but now the up-and-coming Chinese firm is looking to wow us a second time with the Ascend P6, a similar Android smartphone with a few hardware tweaks.

Huawei is fond of crafting creepily thin phones, and the P6 is no exception, measuring a slender 6.18 millimeters (0.24-inch) thick. The aluminium edges are very reminiscent of the iPhone, but the bottom of the phone is rounded, giving the P6 a tiny bit of original flair.

Like the P2, the P6 sports a 4.7-inch 720p display, and plays host to a quad-core processor clocked at 1.5GHz. There's an 8-megapixel camera glued to its rump, while unusually, the front-facing snapper is a 5-megapixel affair, making the P6 ideal for Skype calls or carefully-posed sexy selfies.

Inside you'll find a 1.5GHz quad-core chip powering the P6, backed up by a hearty 2GB of RAM. There's 8GB of on-board storage, which you can beef up using a microSD card if you need more capacity.
The battery is a 2,000mAh unit, which is smaller than the P2's 2,420mAh battery. Fingers crossed that doesn't see the P6 running out of juice halfway through the day. 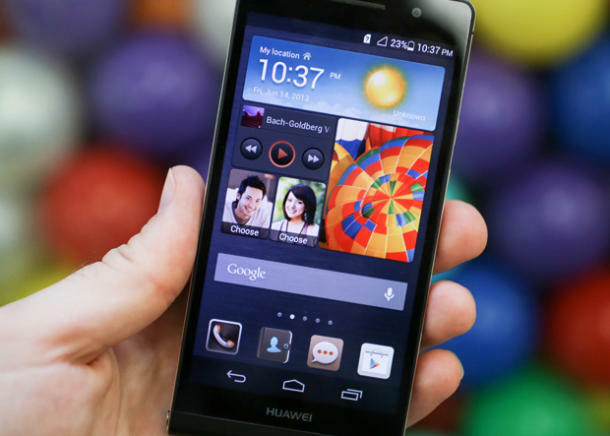