Userlevel 7
Nintendo started the age of 'next-gen' gaming consoles when it released its Wii U back in November 2012. While it was the first Nintendo console to support high-def graphics, calling it 'next-gen' is somewhat misleading considering the fact that spec-wise, it just barely outperforms the current Xbox 360 and PS3. That, coupled with reports of buggy-ness, mixed reviews, and disappointing sales numbers, led most people to overlook the console and wait for the 'big-dogs' to make their announcements as we kicked off a new year. Albeit a bit Murky, Sony made their announcement back in February.

But until now, the good majority of video game news surrounded a slew of Xbox rumors, most of which infuriated customers, spurred backlash from a company, and even got an employee fired.

Today, multiple reports (including this one from CNET) confirmed that Microsoft has set a date for the next Xbox reveal. On May 21 at 10:00 AM at the Xbox campus in Redmond, Washington,  the Xbox team will unveil the console and hopefully provide answers to the many, many questions that current Xbox players have. Until then, I'd love to hear your opinions on what you expect (or want to expect) to see from Microsoft's next big thing. 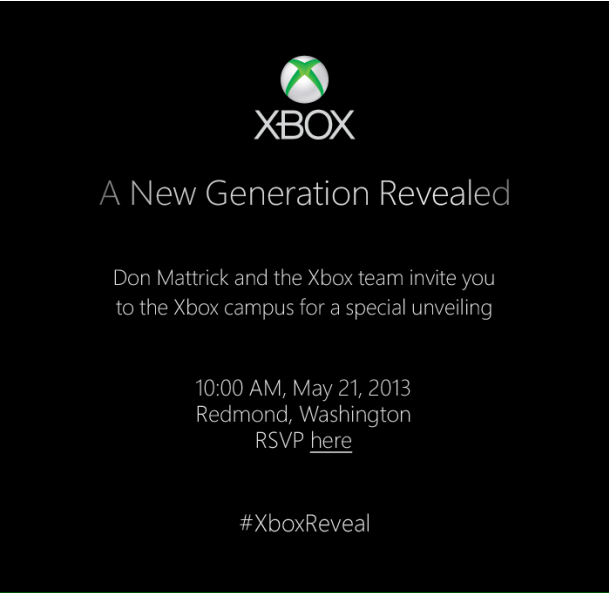 Userlevel 7
I am not much of a console gamer at this point, although I do have very high expectations of this release: My 12 year old is bound to start begging for one long before they hit the shelves.  :S
New to the Community? Register now and start posting! "If you don't learn something new every day, you need to pay more attention. I often get my daily learning here so grab a chair and stay a while!" WSA-Complete (Beta PC), WSA Mobile (Android), WSA Business Mobile (Android) WSA-Endpoint (PC- Some of the time.....)

Userlevel 7
For the first time in a long time I am not actually that excited by the new consoles. If the new Xbox requires a constant on Internet then I wont be buying it. The specs of the next gen arent that impressive and arent the leap that we saw from the Xbox-Xbox 360. More of the same really.