Userlevel 7
Walking into Apple's WWDC 2013 keynote, few attendees guessed that the only laptop to get an update would be the MacBook Air. Last updated almost one year ago, the Air remains the most mainstream-targeted of all Apple's systems; in fact it was clearly the laptop most used by WWDC press attendees to blog, tweet, and report on the keynote.
But almost as surprising as this being the only MacBook to get a June 2013 update is the relative paucity of new features, at least at first glance. The main new selling point would seem to be the move to Intel's new fourth-generation Core i-series CPUs, also known by the codename Haswell.
New hardware
We've previously tested Haswell chips in a few laptops and been impressed with both the performance and battery life gains (to be realistic, the latter is much more important for consumers). If you add Haswell to Apple's already-stellar battery life reputation, you get a system, in the 13-inch Air, that Apple claims will run for up to 12 hours. Especially with such a long promised battery life, it will take us a couple of days to fully test this claim, but we'll report our battery life test results in the full review of the 13-inch MacBook Air. 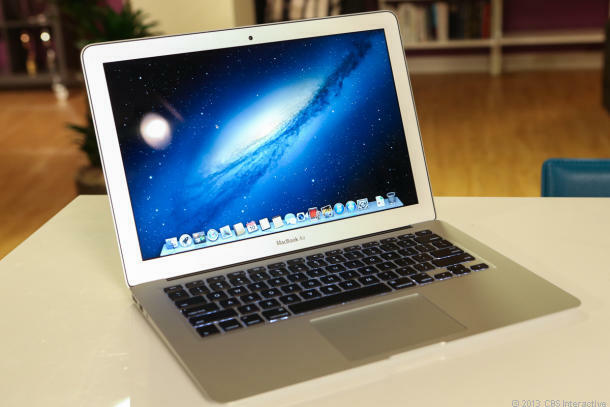 Having a Haswell-generation CPU also gives you Intel's improved HD5000 graphics, which promises improved game performance over last year's HD4000 graphics (itself an improvement over the preceding HD3000, and so on). It's still not anything like having a discrete GPU, as in the 15-inch Retina Pro, but with game services such as EA's Origin now being Mac-compatible, it may make some small inroads for OS X gaming.
Also new is 802.11ac Wi-Fi, a new standard that will be found in wireless routers, as well as Apple's new AirPort Extreme and AirPort Time Capsule hardware. If you have a 802.11n router, which is a much more likely scenario, this may not help you, but it's a nice piece of future-proofing. Apple also says the SSD storage included in the Air laptops is now faster, although I think bumping the base $999 11-inch model up to a full 128GB of SSD storage is a much more important development.

It's easy to say that this new version of the 13-inch MacBook Air is a modest step forward, with no physical changes to the exterior, and still no higher-res display, touch screen, or HDMI port. The battery life is a potentially very big deal, however, and when you couple that with a $100 price cut on the base model, down to $1,099, the 13-inch MacBook Air is, despite not being the newest design on the block, still one of the most universally useful laptops you can buy.

Design and features
The MacBook Air keeps the same external look as the previous couple of generations, a look that still rivals the newest ultrabooks, although some new systems, such as Sony's Vaio Pro line, are getting thinner and lighter, without sacrificing much in the way of productivity.

Both the 11-inch and 13-inch versions of the MacBook Air still have the same thickness, ranging from 0.11-inch to 0.68-inch. Spread over the larger footprint of the 13-inch chassis, the 13-inch version still feels satisfyingly thin. 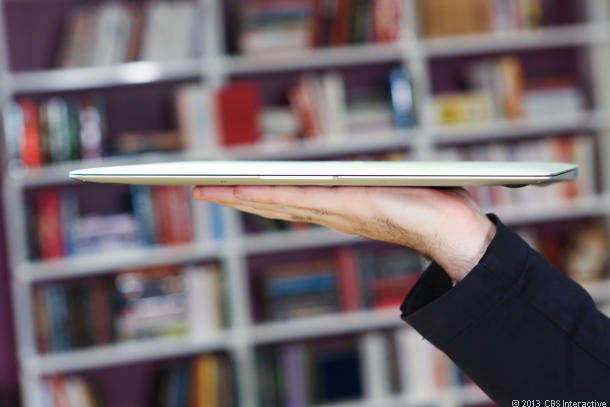 As with the previous version, the rigid aluminum construction makes the Air feel sturdy enough to just throw in a bag and carry along with you without a protective case or sleeve, and it's interesting to contrast the aluminum unibody construction here, with the lighter carbon fiber in the previously mentioned Vaio Pro. I'd still trust the Air and its unyielding lid more in a throw-in-your-luggage field test.

The backlit keyboard and trackpad are the same as on the previous models, and the trackpad especially remains the standard by which all others are judged. Many other laptop makers have moved to larger clickpad-style touch pads, but we have yet to find a touch pad that comes close to this for multitouch gestures. The pad is again hinged at the top, allowing the entire pad to click down, and we strongly suggest going into the Preferences menu and turning on all of the tapping options for further ease of use.

It will be interesting to see how Apple's user interfaces develop in the face of both Windows 8, which tries (not terribly successfully) to reinvent the entire concept of working with a computer OS, and the upcoming OS X Mavericks update. For now, flicking around with three-and-four-finger gestures on the MacBook touch pad remains the most seamless way to swap between windows and applications, at least in my experience.

Unlike the 11-inch MacBook Air, the 13-inch screen is still not a 16:9 display. The screen area also lacks the edge-to-edge glass over a black bezel found in the MacBook Pro; instead the screen is, as in previous years, surrounded by a thick silver bezel.

On the positive side, the native resolution of the display is 1,440x900, which is a better than the 1,366x768 you find in many 13-inch laptops, although, more expensive models are quickly switching over to 1,600x900 or even 1,920x1,080. And, of course, the Retina Pro models, along with a handful of laptops from Toshiba, HP, and Dell, are experimenting with even higher-than-HD resolutions.
We're currently running our CNET Labs benchmark tests on the new 13-inch MacBook Air, and will post results, along with battery life scores and our final review, later this week. 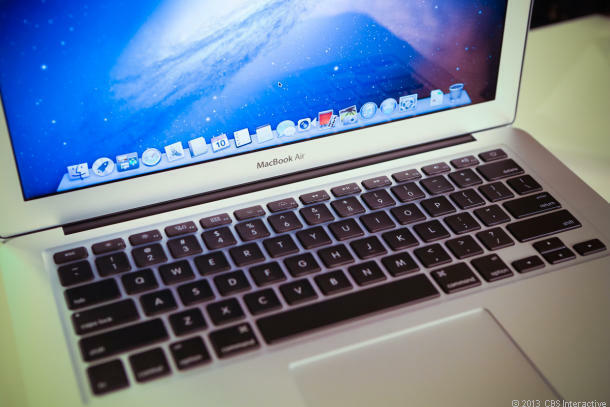 Source : Cnet
Be the first to reply!