Userlevel 7
A digital camera that functions like an insect's compound eye is reported in the journal Nature this week.

It comprises an array of 180 small lenses, which, along with their associated electronics, are stretched across a curved mounting.

The prototype currently has few pixels, so its images are low-resolution.

But the device displays an immense depth of field, and a very wide-angle view that avoids the distortion seen in standard camera lenses.

The development team, led from the University of Illinois at Urbana-Champaign, US, believes its new imaging system could eventually find uses in surveillance and for endoscopic investigations of the human body.

In their report, the researchers also suggest such cameras could be fitted to tiny aerial vehicles one day that behaved like robotic insects.

At the moment, the "bug-eye" system's vision is comparable to that enjoyed by some ants and beetles.

The expectation, however, is that the array can be greatly enlarged. 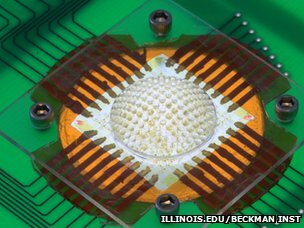 The latest generation of stretchable electronics was key to achieving the curved shape
Be the first to reply!