+21
Using the latest webroot V9.0.26.61 on my windows 7 pc. With the latest version scans are now taking about 19 mins. I submitted a support ticket last week. I uploaded logs as requested on thursday and as I had not recieved any response to confirm they had been recieved I contacted weboot. I spoke to a representative this afternoon who said the logs where being analysed and I would recieve a response either today or tomorrow. Just a few momments ago I got a response saying they had not recieved the logs and could i send them again. What is going on? I have replied and sent the logs a second time. Not very good customer service!
Show first post Hide first post
Page 2 / 2

+16
I'm looking at the logs now, and while I can see three scans, historically. All over 20 minutes, the first scan included three detection's as well. I'm not seeing a quarantine DB, which suggests that you manually overrode these files. This can have an impact on interrogations of files lengthening the scan since the system thinks it's still potentially infected. If these files were FP's please let us know, and we can correct the determinations.
System events provide the following messages as well:
Disk 7 Error None Stephen-PC The device \Device\Harddisk0\DR0 has a bad block.
further performance hits are likely due to this message:
Microsoft-Windows-Kernel-Processor-Power 6 - Some processor performance power management features have been disabled due to a known firmware problem. Check with the computer manufacturer for updated firmware.

This suggests that the system isn't operating at peak performance. More information on this message can be found here:
https://social.technet.microsoft.com/wiki/contents/articles/3565.event-id-6-microsoft-windows-kernel-processor-power.aspx

While it's possible that any of these issues could cause longer than average scans, the fact that we see all three combined go some ways to explain the issues here. I'd consider looking into the disk and CPU settings, as well as the detection.

+16
There are a number of changes in the .26.61 build that may have an impact on performance, when coupled with older hardware. I expect this to be the contributing factor in this case.
Webroot Sr. Escalation Engineer Grashocki on the WildersForums
M

I am thinking from how they are saying, it is an on-going issue they are working on fixing and has to do with the last update to Webroot - Version / 9.0.26.61 which came out a short time back.

I've pulled the case, and the logs from the XP machine. Have you ran the utility for the Windows 7 machine?

Unfortunately Lucas, my wife currently has the Win7 ThinkPad and will be staying with her family out of town for another week. I returned home early after the 4th due to work commitments.

I'll try to ask her to pull logs but she may be reluctant due to being "less" than non-tech savvy (if such a level is even possible). As a non-smartphone person in her early-sixties, she always worries about messing something up, especially when she's away from home w/o me there physically to help.

I will pull logs from the Win7 ThinkPad upon her return in the worst case senario.

Our Win10 ThinkPad is unaffected .... Thanks for your investigation and help.

+16
there is a method for rolling back. I can provide that information in the support case once I see your reply.


Oddly seen the same for my webroot, the scan before this one was 20m 38s an the last scan I had was only 10m 48s and I have seen similar things with it running apparently slow still then picking back up again at the end too.

+21
My computer has been running slow and tonight froze and was almost crippled. I checked task manager and my cpu was running at 100%. I have shutdown webroot and my pc is back to normal. There is a problem with the latest version with slow scan speeds and excessive cpu usage. Feel fobbed off as support say there is no problem with the latest update.
S

Another update on my webroot, my webroot now scans around 5 / 6 minutes now total though still seems to eat up processor space, being that it runs still nearly 99% useage when running.
C

+1
Hi,
I have also been experiencing slow scans probably for the past 7 to 10 days. I'm guessing it has to do with Software Version 9.0.26.61. Daily scans used to take 5 minutes and now are taking 30 minutes. It stays in "Performing Central Analysis" for a long time. It's a Windows XP machine but it's got a Core 2 Quad CPU Q8200 @ 2.33GHz with 2.00GB of RAM. There haven't been any known changes in my PC's configuration. No new programs, no new hardware, etc.

I haven't tried uninstalling/reinstalling but I did uncheck the box under Advanced Settings > Scan Settings > Allow files to be submitted for threat research. This made no difference in scan time.

Hopefully, a resolution to this recent slow scan issue can be resolved in a new Software release.
Regards,
creakndale

+21
I've noticed this symptom in April when doing testing on Beta v9.0.24.49
as I mentioned on the beta thread:
https://community.webroot.com/wsa-for-home-beta-73/updated-file-for-wsa-pc-consumer-beta-systems-337909

During that time, there was mention of some beta users being on version/revision 25 vs 32. I was able to toggle between the 2 versions and definitely saw differences in scan time especially in the Central Analysis stage.
I don't have access to that machine right now to recreate with current production version but definitely isolated to that Win 7 desktop at that time and I was not able to recreate on my other laptop with Win 10.

I've decided to re-test the Revision 25 vs Revision 32 scan time comparison using a better way - by reinstalling the beta before each test. Results mimick what I have seen yesterday - Revision 32 scans significantly slower on my environment.

So maybe issue is isolated to either certain machines and/or Webroot backend versions / servers?

It can be anything from 5 to 6 minutes to up to 11 to 15 minutes, strange... it seems marginally better.

I observed the other night the first approx 50% completed in 4 minutes. And the scan still took a total of 80 minutes to complete. I've observed most of the scan time is spent in the last part, Central Analysis, approx 80% of total scan time.
C

+1
TechToc,
Thanks for hanging in there trying to solve the slow scan issue. Per your request using Process Explorer.
creakndale 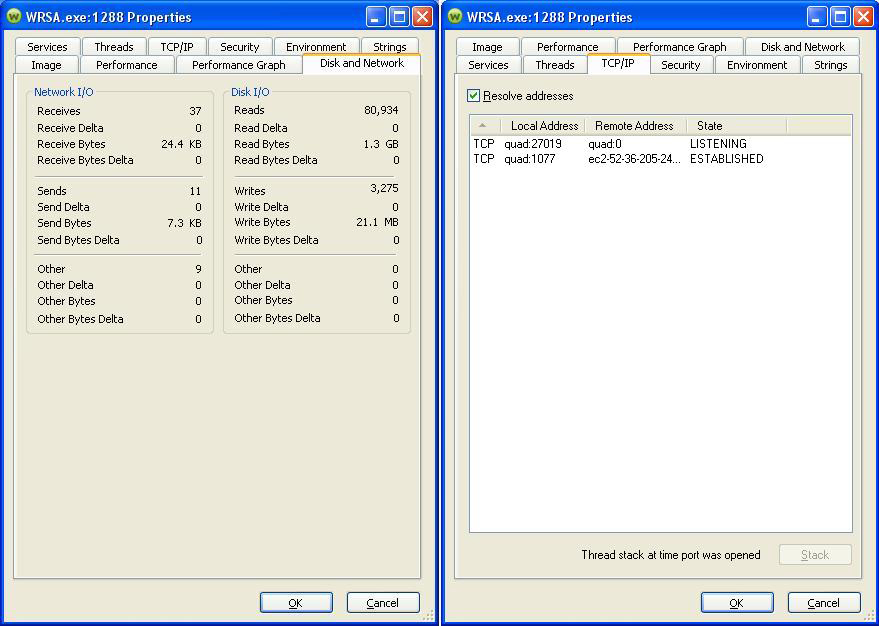