How big is your antivirus? Would it fit on a diskette, if you could find one? Webroot SecureAnywhere AntiVirus (2015) manages to outperform most of the competition while remaining ridiculously tiny and light on resources. Both in independent lab tests and in my own hands-on testing, Webroot gets top marks. 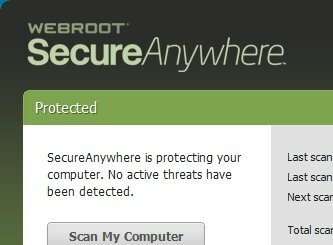 The program's main window features a big button labeled Scan My Computer. It reports statistics, among them the time and duration of the latest scan. Simple switches let you turn the Realtime Shield, Web Shield, and Firewall on and off. Other links let you perform detailed configuration or get various views on the program's activities and system behaviors.

I should point out that the component called Firewall doesn't do what you might think. Rather, it tracks Internet and network connections and cranks up the heuristic detection level when it encounters suspicious activity. It doesn't attempt to stealth system ports, nor does it attempt the sort of program control that involves defining permissions for each program. It's meant to be used in conjunction with Windows Firewall, which does a fine job of stealthing your PC's ports and fending off external attacks.