They say that imitation is the siuncerest form of flattery...so take a look at Panda's latest offerings:

"The range includes four products. Antivirus Pro 2015($39.99) offers antivirus, antiphishing, a firewall and wifi protection; Internet Security 2015 ($49.99) adds Data Shield, parental controls and online backup;Global Protection 2015 ($69.99) includes protection for Mac, iPhone and Android devices, along with a password manager, file encryption and shredding tools, and a PC tuneup module; and the high-end Gold Protection ($89.99) offers a 20GB online storage and file sync service, and a “disinfection assurance” service where, if necessary, a Panda engineer remotely connects to your computer and removes any threats."

+56
Not even on the same planet that's how close they are. LOL

+56
There was a Panda rep on Spiceworks who was trying to claim they were first to do cloud AV - Richard and I were like "nope, sorry"
R

There was a Panda rep on Spiceworks who was trying to claim they were first to do cloud AV - Richard and I were like "nope, sorry"

I don't know what Panda was "smoken" buts thats the only thing in the cloud ....here's what I have to say to Panda on their account. http://www.myemoticons.com/images/emotions/annoying/toungue-out.gif

+54
Well it will not be long before they are all doing the same, downloading those definitions are too much now PLUS they have to be seen to be up with the best and up to date.

Looks like the race is on. But the other companys started too late, Webroots at the finish line while others are just getting off the start line. Looks like everyone wants to follow the leader "WEBROOT".

+54
The other companies did start late and now the race IS on so maybe what Webroot and all of us should be thinking is, What is going to be the next system? We have had those countless definition downloads, now the cloud but what is next? admittedly they have a mountain to climb to catch up but the gaps will narrow.

Userlevel 7
What I find comical is the "the high-end Gold Protection ($89.99) offers a 20GB online storage and file sync service, and a “disinfection assurance” service where, if necessary, a Panda engineer remotely connects to your computer and removes any threats.""

Only if you pay $90...when you get superb, best in class support effectively for free whatever version of WSA you purchase...they really have not understood one of the things that makes WSA such a great product...doh!
Webroot SecureAnywhere Complete Beta Tester v9.0.24.49, imaged by Macrium Reflect v7.2

+54
That Solly is one of the things which keeps Webroot and the next nearest competitor worlds apart. Customer support is one the greatest thing about Webroot and what I make sure I tell people, that IF there does happen to be a prob, help is at hand and free of charge.

Jaroch explained that all the SecureAnywhere products are exactly the same file, with different features turned on based on which license key you use. Where most security suite installers weigh in anywhere from 60MB to well over 200MB, SecureAnywhere would fit on a floppy disk, so there's no reason to create separate versions.

Jaroch's team totally built the product from the ground up using raw C code. There are no embedded bitmaps, no visual tool libraries, no buttons. Every element of the user interface is rendered as needed.

"If you snap a screenshot of our product and save it as a bitmap, the screenshot will be bigger than the product itself," Jaroch said. Morris added that this minuscule local client leaves little "surface area" exposed to attack by malware."

One reason the local application can be so tiny is that it doesn't include any malware signatures, Morris explained. The Prevx technology relies entirely on an immense database of applications and behaviors in my Cloud. This database collects and correlates an almost-unimaginable amount of information about every process ever run on any system with SecureAnywhere (or Prevx) installed. Along with the expected notes about process behavior it correlates things like the geographic location, browser version, and other elements of the sample's "habitat."

According to Morris, this database, code named ENZO, can include as many as two million database rows for a single process.

"Cybersecurity is all about information," said Morris. "We store and correlate allthe factors about the process's behavior in all the places it was seen. We aim to have more information than anyone, so we can offer better protection than anyone."

"A Researcher Inside Your PC

In most antivirus research labs, technicians dismantle malware samples, run them under controlled circumstances, and analyze what they do.

"Some threats may not do anything bad if they've been coded to lie low when running at, for example, a Symantec IP address," Morris said. He went on to explain, "I asked the researchers exactly what tools do you need, and what information do you expect to get? Then we put those tools into the product."

"Every user's PC becomes a malware researcher, Jaroch added. "We see the new behaviors immediately and get better information than if we ran the samples in our lab." 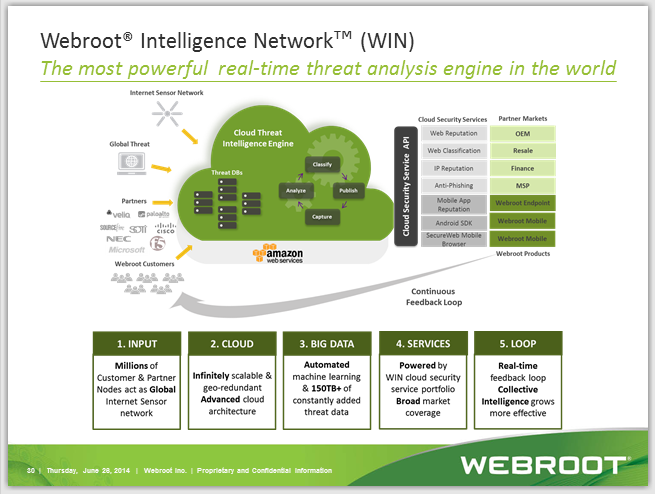