Userlevel 7
Microsoft is offering people a peek at Windows 8.1 in action courtesy of a new video.

Posted Wednesday on YouTube, and embedded into a Microsoft blog, the tour conducted by Jensen Harris, Microsoft's director of program management for Windows User Experience, shows off key enhancements to the Start screen, the All Apps screen, and the search tool.

The video kicks off with a glimpse of the new lock screen, which can now display a collage of photos gathered from your PC and your SkyDrive account. The tour then segues to the Start screen where you can now shrink or enlarge your tiles using a wider array of sizes.

Then it's on to the All Apps screen, where tiles can now be sorted by date installed, most used, or category, as well as by name. Tiles from the All Apps screen can easily be added to the Start screen via a touch of your finger, assuming you're using a touch-screen device.

Moving and naming groups of apps on the Start screen is much easier in Windows 8.1, as Harris demonstrates. You can select multiple tiles at a time and then drag them into their own separate group. Windows then displays a text field where you can name the group.

Windows 8.1 will let you better customize the Start screen using new built-in images or the same wallpaper that appears on your desktop. That latter option is a smart move on Microsoft's part as it helps to unify the Start screen and desktop, at least in appearance. 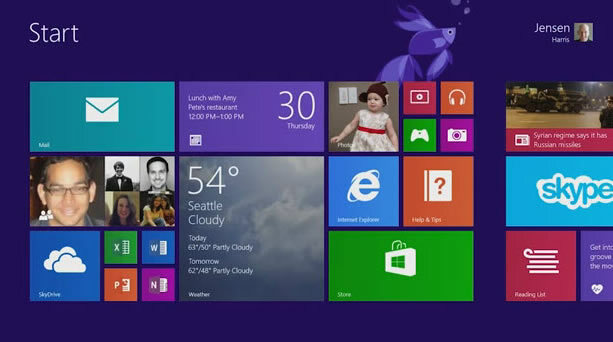 Summary: Microsoft is sharing more on how existing Windows 8 and Windows RT users will be able to upgrade to Windows 8.1 'Blue' preview and final.

With the public preview builds of Windows 8.1 due out later this month, a number of users are wondering how Microsoft plans to handle the upgrade.

http://cdn-static.zdnet.com/i/r/story/70/00/016419/bluesclues-200x109.png?hash=LwRjZQqxZQ&upscale=1At TechEd North America, officials shared some details on that topic in a session entitled "Windows RT in the Enterprise."

Microsoft officials have said previously that the company plans to deliver the public preview of Windows 8.1, codenamed "Blue," via the Windows Store on June 26.

Microsoft Senior Product Marketing Manager Michael Niehaus reiterated that message in the RT in the Enterprise session on June 4. When the 8.1 preview is available, Windows 8 and Windows RT users will receive a Windows Update notification. That update will trigger the new bits to show up in the Windows Store, where potential testers will be able to read the description and choose whether or not to install.

Once the final versions of Windows 8.1 are available, after their release to manufacturing, those who have downloaded the preview will get the same Windows Update plus Windows Store notification. While their data and accounts will be preserved if and when they choose to install the free, final 8.1 release, all their apps must be reinstalled, Niehaus said.

Even if testers opt instead to roll their devices back to Windows 8 after installing the preview bits, they still will have to reinstall their apps once they move to the RTM version of Windows 8.1.

Update: For those wondering exactly which apps will need to be reinstalled, it depends whether the tester is running Windows on ARM or x86. On Windows RT devices, it's the Windows Store/Metro-Style apps that will have to be reinstalled; for x86-based Windows 8 systems, testers will need to reinstall both their Windows Store/Metro-Style and Desktop apps, a Microsoft spokesperson said.

Windows 8 users who do not install the preview build and opt instead to go straight from Windows 8/Windows RT to Windows 8.1 will not have to reinstall their apps. All settings, data and apps will carry over, a spokesperson said when I asked. Users will be able to decide when and if they want to move from Windows 8 and Windows RT to the 8.1 versions, officials stressed.

Niehaus also told session attendees that Microsoft expects to have a reduced footprint size for Windows 8.1 as compared to Windows 8. He said the team has been working on removing old components, temporary files and improving NTFS compression to free up more space on users' machines. He noted that 4 GB of free space will be needed to install the Windows 8.1 preview builds. And he said that installation of Windows 8.1 will not result in the replacement of the recovery partition in Windows 8.