World password day is this week and we’ve decided to make a tier list highlighting popular movies/TV and the passwords they used in the theatrical release. Check out our Tier Maker template

Now, before you get upset that your favorite movie doesn’t rank high enough or there is no movie in an S tier rank, let’s talk about the ranking methodology. I want to preface this with the fact that with 4x2080ti GPUs you can crack 15 characters in 15 hours (almost 3 years ago) so this alone kills anything below A tier. Also, almost every movie here (or at all) doesn’t have computer terminal interface that allows uppercase/lowercase so we had to ignore that factor when grading.

F Tier →  <=8 characters, No special characters, ONLY numbers or ONLY letters, repetitive, sequential or VERY easy to guess [0000, 1234, password, football]

C Tier →  <=8 characters, can include special characters, MUST include numbers and letters.

B Tier → >8 characters, MUST include special characters.

A Tier → >15 characters, MUST include special characters.

When Dark Helmet first heard the password, he said "12345? That's the stupidest combination I've ever heard of in my life!"

“When Bond enters his password in the casino, he enters 836547. He later gives the password as VESPER, which on an alpha-numeric keypad would be 837737.”

Casino Royal can’t even get the word translation to keypad correctly!  → D

The safe even allows for more characters! → D

in "Die Hard" (1988), Joe Takagi’s much-sought-after password is AKAGI. The Akagi was a Japanese aircraft carrier in the Battle of Midway, the flagship of Vice Admiral Nagumo. In "Midway" (1976), Nagumo is portrayed by James Shigeta... who also played Joe Takagi in Die Hard.

5 letters and it’s one letter removed of the name of the President of the company >:(  → D

This password doesn’t show on screen and is read to him by Luther. Definitely a great scene!

Hey at least we’re getting numbers AND letters now → C 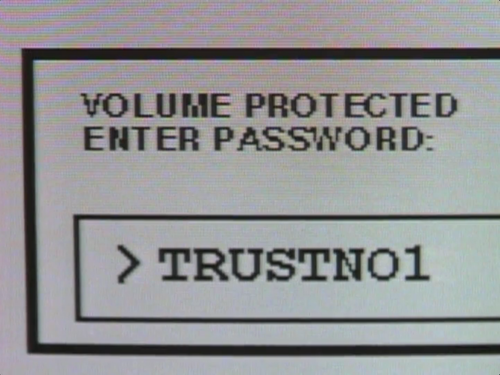 Not surprisingly, Mulder's computer password is "trustno1". These were the last words that Deep Throat said before he died, and was indeed used in the titles of the season 1 finale, The X-Files: The Erlenmeyer Flask (1994). "Trust No 1" would also be the title of an episode in Season 9.

“In The Matrix Reloaded, Trinity resets a system password to "Z10N0101", which can be read as "Zion5". Under the zero-based indexing common in computing, this might refer to the 6th Zion. This scene precedes the revelation that the Matrix is in its 6th iteration.

Just 1 more character and this would be B tier! → C

Who Framed Roger Rabbit – “WALT SENT ME” [B Tier] 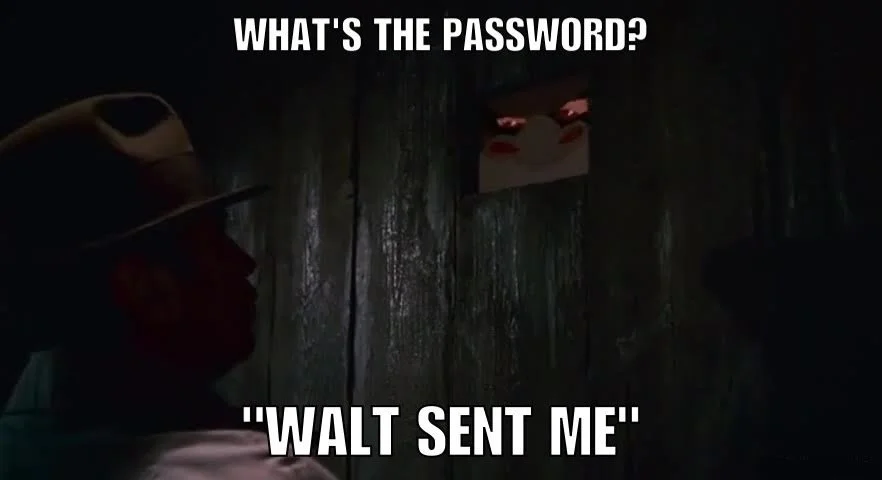 “The password to gain entrance into the club is "Walt sent me" and has to be said to the bouncer, Bongo the Gorilla. According to Mr. Maroon, the club is managed by Toons, but clients are exclusively human.”

We included the spaces as special characters in the ranking → B

[trying to find the password to the Preservation Room]

Riley Poole : Valley... I don't have that on my computer.

Ben Gates : Valley Forge was a turning point in the Revolutionary War.

Riley Poole : Can I marry your brain?

Length and space are good, but we never got to see if they used uppercase/lowercase → B

“The password she enters on the computer is Rameses II. Not only does this refer to an actual pharaoh in ancient Egypt who was known as Ozymandias in Greek sources, but it's also the same password that Nite Owl uses to access his computer in NYC to find out where he was hiding. You don't use the same password for all your plans, Adrian!”

The space and length is good, but no numbers → B

For an early 80s movie, this is a great password. Long length and has spaces → A

Tron was disqualified from receiving an academy award because using computers for special effects was considered cheating at the time! Can you believe it!?

Let us know what passwords you’ve seen in movies that would qualify as an “S” tier rank!

The attention to detail and effort gone into this post alone deserves a clap, very enjoyable read! Would "speak friend and enter" qualify at all here? (lord of the rings).

Oooh. Love this thread. Also like the tron fact!

"The only problem with troubleshooting is that sometimes trouble shoots back!"

“Speak friend and enter” would be a very good password though

It’s funny watching some of these movies with security in mind. Was just thinking back to the classic War Games.

The password to the computer in charge of launching all of our nukes was JOSHUA.

D (F?) Tier password for a system that can destroy the world 10 times over. At least they didn’t have the Internet in the 80s.

In Ace Ventura pet detective the password is “New England Clam Chowder” and then he is asked if it’s the red or the white. “White?” is the answer. Surely that’s some basic level of two stage authentication?!