Userlevel 4
I was wondering if anyone else was using WSA with another AV. I know WSA has become much more robust than the Prevx days when it was marketed as an additional security layer to detect the threats that other AV's commonly missed. If you are using WSA with another AV then are you having any conflicts? I just installed WSA 8.0.4.17 with the final release of NOD 32 V7.0.302.0. I have not rebooted yet, but immediately I just had an issue with Firefox right after installing WSA. I clicked Firefox, and it never did run. I waited for about 30 seconds, and it never ran. I clicked it again, and it ran about 3 seconds after I clicked it a second time. I checked the task manager, and there was 2 instances of Firefox running.
icon

Userlevel 7
You may be don't want to hear this but I use WSA Complete alone already for 2 years with only Windows Firewall enabled and I never had an issue with malwares or similar.

However for many years back I used Norton Internet Security together with Prevx and later with WSA and had not also any security issues. Only hitch was in intermittent performance peaks which turned out to be Norton causing these.

Userlevel 4
I had been using Prevx, and later WSA with NOD 32 for many years without any problems. I also used WSA with Avira some during that time as well. I had no conflicts with  Avira as well.  I just recently hooked up one of my test machines, and I thought I would see how NOD 32, and WSA are running together since I have had all my test machines in storage until recently. This is a wicked fast machine so I have noticed no slow downs other than it takes more time for my browser to open.

wrote:
This is wicked fast machine so I have noticed no slow downs other than it takes more time for my browser to open.


Interesting because I also have encountered slowdown when starting Opera 17 (Chromium). However this is not the case for Opera 12 and IE9. I have had two remote sessions with Lucas this week and eventually this issue has been escalated to developers.

Can I ask what is your browser encountering the start up issues?

Userlevel 4
I'm using Firefox 24, and it failed to lunch the first time i clicked it . I had to click Firefox again, and then it opened. I checked my task manager, and I had 2 instances of Firefox running. After I rebooted a moment ago I was able to lunch Firefox without any problem. I did not notice a slow down that time. I will keep an eye on it. I also have the latest build of Opera installed, but i have not tried Opera yet.

Userlevel 7
Just in case you try Opera ... if opera.exe is Protected it is slow but if you change it to Allowed (Application Protection) the speed is back. As for FF sorry I cannot speak as I don't have it installed.

Userlevel 4
Ok, thanks! I will keep an eye on Opera as well.

Userlevel 4
I have Kaspesky installed on one of my parents old Windows Vista PC's. My dad got it in 2006. My niece, and nephew have been complaining that it is slowing down. I'm going to put WSA on it when I get time.

Userlevel 4
Well, i'm got to get some rest. I will check on this thread tomorrow. Later.

Userlevel 7
Could you check if Firefox is being allowed and not monitored in system control? I've seen my friend jmonge in the Wilders Security Forum use ESET AV with WSA along firefox without any issues.

You can open a support ticket https://detail.webrootanywhere.com/servicewelcome.asp so any issue with WSA can be looked at by the Webroot Team.

Userlevel 6
I actually had that same issue on both my work and home machines. One of my machines at home has no AV on it as it acts as a home server with little outside connectivity, and I had issue after issues with F24. I finally just gave up and installed Chrome, which has always been my browser of choice.

If you feel that WSA is causing an issue though, please do submit a ticket so my team can look into it for you.
--Richard Melick-- Marketing Outreach Specialist Webroot ThreatBlog Stay updated with unique security news and follow me on Twitter

Userlevel 4
It only happened right after I installed WSA. I had not even done a reboot yet. It has not happened since. Firefox, and Opera are both working just fine now. Firefox was being monitored in the beginning, and WSA changed it to allow on it's own without me having to do it. Everything is running great right now.

Userlevel 6
Good to know. I probably had some fluke issue. I tend to find those.
--Richard Melick-- Marketing Outreach Specialist Webroot ThreatBlog Stay updated with unique security news and follow me on Twitter

Userlevel 4
I had been running NOD 32, and Prevx together as part of my regular setup for years. NOD 32, and WSA are working fine on this machine, but it's a very powerful machine. I'm not sure I could get away with it on lower end machines without taking a performance hit. I don't have Appguard installed with NOD 32, and WSA thought right now. That's also part of my regular setup. Appguard has no noticeable effect on system performance though unless you run into incompatibility or a bug.

Userlevel 4
I guess I spoke too soon. I just had Firefox fail to run again. I initiated FF by checking for an update for CCleaner within the CCleaner UI by clicking on check for updates . FF is my default browser, and when I clicked on the check for updates link FF never opened.I checked the task manager, and FF is running in the task manager. I had this problem in the past when using WSA by itself. It had to do with the Identity protection module. I had to lower the settings. I just checked in the Identity Protection guard, and it says protect again instead of allow which is what one should use to be safe. Seems like I may have to start a support ticket on this to see if they can fix it. I think it's a bug. 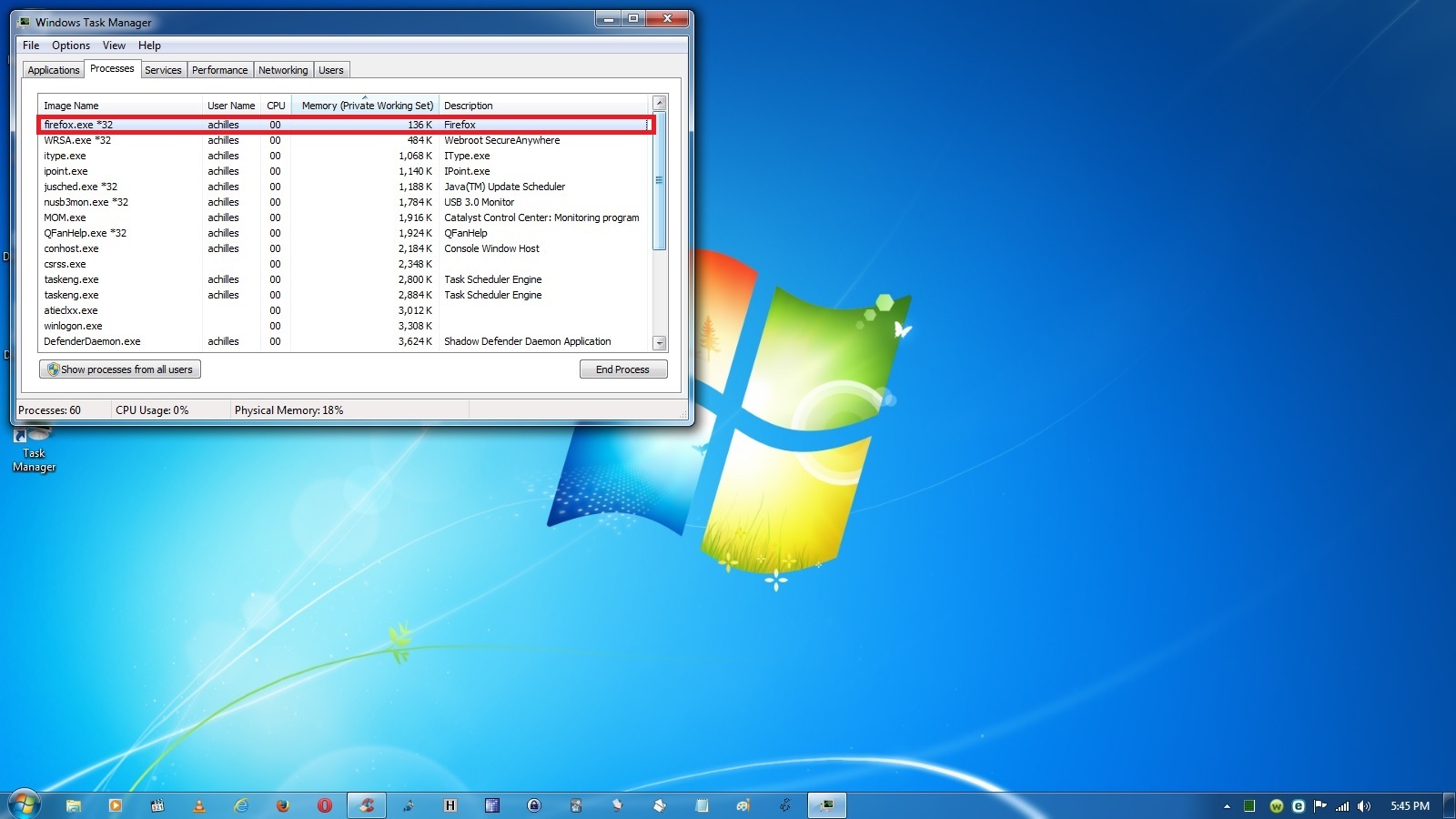 Userlevel 4
I forgot to add the image to my post above so I went back to add the image, and when I selected the add image button it locked my browser up. It stopped responding for about a minute before unlocking.

Userlevel 4
I just started a support ticket on it.

Userlevel 4
I ran the log utility for them, and sent logs.

Userlevel 4
I have some studying to do. I informed support I would check back on the ticket tomorrow.
D

+1
Using norton 2014 and emsisoft antimalware 8.1 with webroot 2014 , really great protection and zero problem.
just the webroot antiphishing is not working yet :(

I assume that you have checked Contro Active Processes under System Control to make sure that anything SD-related is not blocked (best that it is Allow but the compromise could be Monitor) and if that yields nothing have you tried adding the various SD components to the Block/Allow list under PC Security Advanced Settings, with a status of Allow?

I run KIS (2104 b) with WSA and whilst I have not experienced any incompatabilities between the two, I have tried to make sure that I exclude or whitelist the key components of each in the other...just to be on the safe side?

Userlevel 4
I have everything that belongs to SD set to allow, and it still is blocking SD's functionality. I believe it is WSA anyways. It has been in the past. I'm going to start a separate thread for this specific problem. I will post the link here after I have started the new thread. Thanks for the feedback! I will go back, and check to see if there is anything not listed in the list that can be added manually.

Userlevel 4
Here is the new thread I started specificially for the WSA, and Shadow Defender conflict. https://community.webroot.com/t5/Webroot-SecureAnywhere-Antivirus/WSA-seems-to-be-blocking-functionality-of-Shadow-Defender/td-p/62687
Page 1 / 2