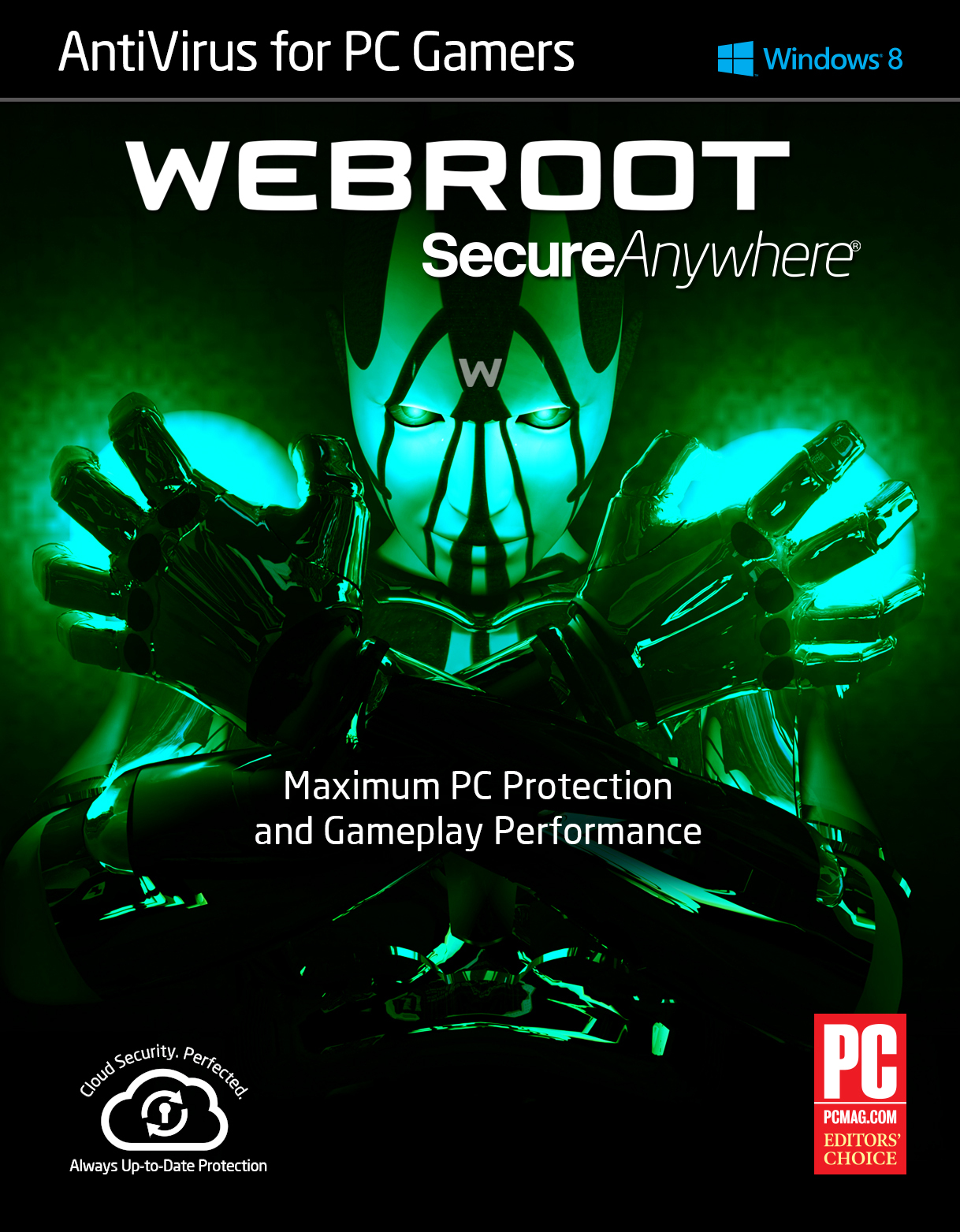 We're curious to know what PC gamers think about antivirus.  What's working for you?  What isn't?  What would you like to see in an antivirus program to complement your PC gaming activities?  Do you feel like you need to disable your antivirus software in order to have a successful gaming experience?  If you're a Webroot user, what particular things make you happy about Webroot as a companion to PC gaming?  Is there anything we need to change to improve the experience?  Are we doing better or worse than whatever antivirus software you had previously?  Have you ever contacted support about a gaming issue?  If so, how did that experience go for you, and what was the issue?

We believe we have what is currently the best antivirus program available for PC gamers because of our light footprint, minimal resource usage, and our Identity Shield, which protects even your games from information-stealing attacks like keyloggers that can be used to hijack your account.

I don't think we have a lot of gamers on this community, but I could be wrong (and actually I hope I am because I'm a big gamer myself and I'd like to get to know you!).  If you know a gamer, please ask them to let us know what they think about antivirus software and gaming in this topic.  We're always interested in improving, and this is one area we'd like to focus on to ensure we're giving every Webroot-using PC gaming enthusiast the best possible experience we can.

+56
Hello and Welcome to the Webroot Community!

Well I would Submit a Support Ticket to make sure there is nothing malicious going on for sure! Also if you know it's safe you can go here and set to allow: http://www.webroot.com/En_US/SecureAnywhere/PC/WSA_PC_Help.htm#C3_Shielding/CH3b_Changing_Shield_Settings.htm and here as well after it's running: http://www.webroot.com/En_US/SecureAnywhere/PC/WSA_PC_Help.htm#C10_SystemControl/CH10b_ControllingProcesses.htm 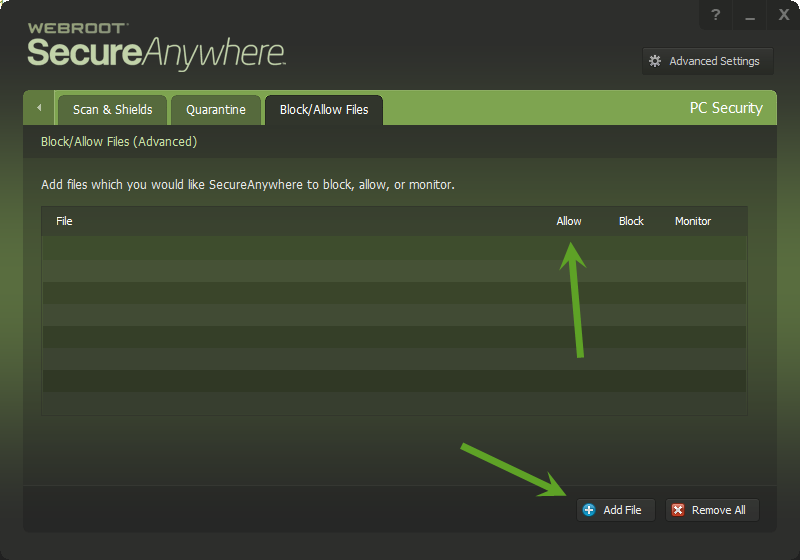 M
I downloaded cheat engine which is NOT a virus but webroot just keeps saying it is. How do I let a program get through webroot?
G

Userlevel 4
Borderlands 2.
Smooth awesome gameplay without having to touch Webroot ever!

Userlevel 7
Let's open this up for more general gaming discussions.  Post the last game you played on your WSA-protected system!

Final Fantasy XIV: A Realm Reborn
I usually don't like MMO's, but this one is really well done.  The interface is about as close to perfect as you can get in an MMO, and the story isn't too bad.  The graphics leave a little to be desired, and the voice-acting is sporadic and inconsistent.  The dynamics are awesome though, and you can really customize your character to a great extent.  I wish it had voice-chat too.  Overall, it's just a heck of a lot of fun to play though.  Runs smoothly, and WSA has had no impact on it.  It's fully whitelisted, so there aren't even any unknown files for WSA to concern itself with.
/// JimM /// /// Former Community Manager - Now Humble Internet Citizen/// /// Also Formerly a Technical Support Escalations Engineer ///

+56
Hello clawmountain and Welcome to the Webroot Community Forums.

Excellent video it looks awsome and you did a great Job now that you joined here take the time to get to know the community we are a great bunch Staff & Members!

Userlevel 7
WOW!  That is really well done!  Welcome to the community !  You really know how to make an entrance!

Thank you so much for sharing this!  :D  Big kudos to you and your whole crew for putting that together!

I consider myself an avid pc gamer, and have always left my antivirus solution on while playing (among them webroot of course). I have never experienced any issues with game performance suffering due to antivirus. I would think this is even less likely to happen with Webroot since it uses less pc resources than other AV solutions out there.

Although I would expect Webroot to interrupt me from my game if an infection is found, I think other than that it pretty much stays out of the way while I'm playing games. Some programs are a bit annoying because they constantly show pop up windows or other trivial notifications which can cause me to exit the game, but that is clearly no the case with Webroot.

I think Webroot is the best anitivirus out there to use with games.
G

is going to love this!
C
Userlevel 1
This is my response to how awesome Webroot is for gaming. IT'S EPIC!!!!!!

http://youtu.be/EF31fFJVrEU
L
I'm also a gamer its nice to have protection,when your doing an online game for me the webroot antivirus does not slow down my performance in any way, Way to go guy's!

This is why it is important for PC gamers to use internet security software.

League of Legends US accounts hacked, credit card details could be at risk

Userlevel 7
You can always untick the removal option when your cracks/keygens get detected and set it to allow on the next screen. BTW alot of these tools are either hack tools that invalidate the EULA of said games and thus are illegal or actually do some malicious activity but thats another days discussion!
G

Userlevel 2
"If you set your settings to alert you rather then to outright block it, then you can always set it to let it slide manually." Johan, that's a perfect solution. What changes would I need to make in order to get these alerts? Are there any other changes to the default settings that you would recommend for a gaming computer? Thanks

Userlevel 5
Adding on more to number 3, as I indicated before trainers and cracks exhibit the same behavior as you would expect from a virus (changing registry settings, accessing active memory, remapping dlls). This would be determined by the Heuristics that are being run on the behavior (which could possibly explain why Kaspersky is not finding them troublesome).

I for one would rather that my software would alert me to possible issues then to let it slide. I can always mark it as clean myself, and if I really think it should not be blocked I can always pass it on to Webroot as indicated. If you set your settings to alert you rather then to outright block it, then you can always set it to let it slide manually.
Johan Gouverneur Webroot Account Manager Dekkers Intermediair B.V.

+56
"3) Webroot is alot more sensitive than Kaspersky when it comes to flagging game cracks and trainers as being malicious. As soon as I installed Webroot on my system, it flagged several existing game cracks and trainers as being malicious. (Kaspersky had classified these as being clean.)  Further investigation on my part proved these to be false positives, and I had to make exeptions in Webroot to get my games to work "properly."


Hello Greekguy have you contacted Webroot support to see if they were truly FP's? Because if they are they can whitelist them for you.

In certain instances, WSA may delay the startup of a program - usually an action it's taking and hold it up for a few seconds. I'm not sure the exact actions it's doing, but it's only ever been with very rare installers I run for the first time on a WSA protected computer.
---------------------------------------- Business Products Sr. Community Leader and Expert Advisor - WSA-Enterprise administrator over 2000 clients First company to 1000+ WSA endpoints | Power User / Business Ambassador / WSA-C and WSA-E Beta tester Find me on Twitter!
G

Userlevel 2
I, too, am a gamer. I play mostly FPS's such as Battlefield 3 and the odd RTS such as StarCraft 2.

I decided to give Webroot a try thinking that my original antivirus (Kaspersky Internet Security) somehow robbed my computer of its performance and caused my games to play at a lower framerate. So, I purchased,  installed and ran Webroot and to my surprise, there was absolutely no difference in the performance of my games: the framerates were identical to those I had using Kaspersky. In otherwords, the game performance was the same, and Kaspersky really didn't slow down my system at all compared to Webroot as the marketing hype wanted me to believe.

The differences  I found:

1) Webroot's memory footprint was about 4MB while Kaspersky's was close to 100MB. Obviously, this difference in memory usage doesn't make my system any faster when playing games as I've noted above.


2) Whenever I install a new program onto my computer, the setup process would start up much, much quicker with Webroot than with Kaspersky. As a matter of fact, the startup of any new program would be delayed by about 10sec - 20sec while Kaspersky did whatever checks it does in the background for new programs. There were no such delays with Webroot. BTW, these delays are a one time thing for Kaspersky: there would be no delays to any subsequent start-up of the program and the start-up time (ie, time it took the program to execute once the icon was double clicked) was comparable to Webroot.

3) Webroot is alot more sensitive than Kaspersky when it comes to flagging game cracks and trainers as being malicious. As soon as I installed Webroot on my system, it flagged several existing game cracks and trainers as being malicious. (Kaspersky had classified these as being clean.)  Further investigation on my part proved these to be false positives, and I had to make exeptions in Webroot to get my games to work "properly."

So, speaking strictly as a gamer, there are really no earth shattering advantages to keep using Webroot over Kaspersky once my subscritpion expires come next year.

Userlevel 7
It wont trust me. My PC is purely a gaming machine and WSA has never once given me an hassle. If it does I would be extremely suprised (and would be interest to know what it detected!)

+26
This is something I was looking into. TBH one of our machines is server 2012 and it's also a gaming PC. I will possibly run a test to see if this product will interferre with his gaming video recording as well. I may also write a review as well. Interesting thread. Good.

Xcom stole so many hours of my life. Not as many asCommand and Conquer though.

wrote:
I am a long term gamer myself I have a decent sized boxed collection of old Dos/Windows games as well as a decent enough console collection...