+56
Yesterday my Oculus Rift DK2 showed up. I was pretty excited. I'd even had a dream the night before, about setting it up and playing with it. Now the reality was in front of me.

I opened up the box and put everything together. If you thought your computer didn't have enough cables, then the Rift has the solution for you. I managed to clear out a couple USB ports and plugged the HDMI in. They were nice enough to include a DVI adapter, which I ended up using. There is a powered passthrough for USB to the headset, which is also a nice touch.

First time I tried to turn on the demo scene, my computer hard froze. Ended up having to hard boot the computer: 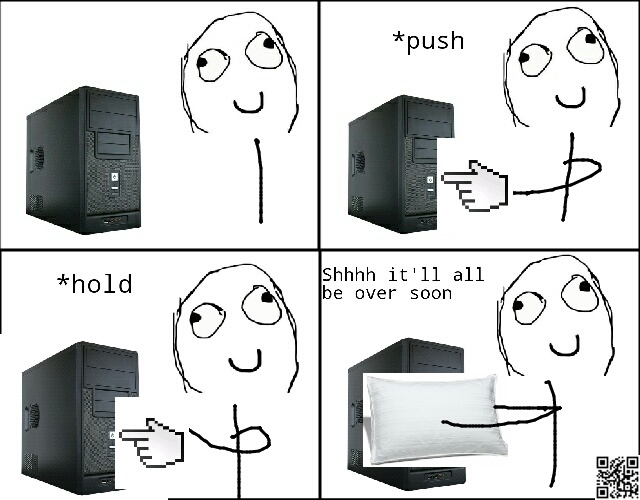 Bad omen, right? Fortunately after rebooting everything seemed to work. I turned on the demo scene and found myself sitting at a desk. The sense of being in the scene was immediate and visceral. There's no sense of 3D like in a movie theater: you are in the room, looking around.

Next up - try out some games, which is the whole reason I got this thing.

First I tried some space flight game I found on the Oculus share site. It was pretty neat, although clearly a bit rough around the edges. It took me a while to figure out how to center myself, so for a time I was sitting in the middle of the left wall of the cockpit. Once I got that sorted out I took off and flew around a bit. Again, it felt like being right in the action, and having the cockpit around me enhanced the illusion of being in a different place. It's like the Rift is this magical box that shows you a different reality.

Next I took a look at what Steam has to offer. They have a few games with VR support, and a VR version of their Big Picture navigation. I turned that on (it's a beta feature) and then gave Half Life 2 a go. The models showed their age, but having the stormtroopers in your face whacking you with the cattle prods was a lot scarier. I managed to get out of the train station and then it hit me. The nausea. I was fine flying a spaceship around, but having the combo of head tracking with moving my body around using the joystick was not working. I took a break and ate some food to settle my stomach. Even followed it up with a ginger pill, which work quite well for motion sickness.

Back to HL2 - ran around the apartment complex to escape. By the time I made it to the roof I was ready to puke again.

Ok, stick to space sims or piloting a vehicle. My theory is that we're used to riding in cars and not puking, but we're not used to walking around and suddenly having everyhing spun around. And in a vehicle you get some of your visual field constant during turns, but in HL2 the whole scene moves when you turn with the joystick.

Now for the real test - Elite Dangerous. I'd already kickstarted it back when it was first announced, so they had a deal where I could get the Beta for only $20. I started the download which ended up taking some time. I tried out another space lander game from the Oculus Share site in the meantime, and managed that with no nausea.

Finally Elite finished loading. Loaded it up and after some tweaking started the tutorials.

The other games I played were just tech demos. This was the major leagues.

After getting the hang of piloting the ship and shooting some barrels, I did my first dogfight. Pure adrenaline rush. Being able to look up as the opposing ship flies overhead is like something out of Top Gun. After about an hour of play I logged off and just sat digesting the experience. It was like nothing else I've ever experienced as a gamer. I may be playing nothing but Elite Dangerous + Rift for the next while. 30 years ago the original game had captivated me on C64. Today it feels like I'm the dude from The Last Starfighter being chosen to fly a space ship in real life.

Ok I realize I've written a lot, so here's the TL;DR

Userlevel 7
Quite a review... and a lot of fun to read.  Love the graphics :)

I look forward to reading "The Continued Adventures of Nic and his 3D Goggles!"

🙂
New to the Community? Register now and start posting! "If you don't learn something new every day, you need to pay more attention. I often get my daily learning here so grab a chair and stay a while!" WSA-Complete (Beta PC), WSA Mobile (Android), WSA Business Mobile (Android) WSA-Endpoint (PC- Some of the time.....)

+54
It will be interesting to see how you get on with this system Nic.

Userlevel 6
Thanks for the review !

I think I'd get dizzy! But it does look like alot fun being in space somewhere!

+56
Glad you guys liked the writeup!

Can't wait to try it on game night.

Userlevel 7
I am not a fan of it for FPS but its awesome for driving games and flight sims. Even something crusty like Live For Speed really was on another level. At the moment the biggest problem is the software, its a real mess to get it working properly.

I am not a fan of it for FPS but its awesome for driving games and flight sims. Even something crusty like Live For Speed really was on another level. At the moment the biggest problem is the software, its a real mess to get it working properly.

Agreed on both points - it will be nice when you can just run a game and have it work without fiddling with settings.