I went through all the files you have listed and found them all in my Vista setup. In fact I found more 😃 in the directory C:WindowsSystem32drivers

Please see in the picture below (in the red rectangles). There is a lot of WSA remnant sys files. They are not all displayed. I made just an example. They are all over across the directory. Hovering over them gives WSA build number, so I noticed they indeed belong to the old WSA builds.

I should add that I never was forced to use the randomize installation.

The clean uninstall of WSA + cleaning temps, registry etc. using CCleaner doesn't remove them. So can you provide a tool which would be capable to remove them? Something like Norton has its removal tool. If not I would have to go the file by file to check if it is really WSA remnant or not. Unfortunately as you can see the files are named very oddly so it is hard to filter/separate them.

I hope you don't mind, I split this topic off into its own thread since this is a separate issue.

The issue you're reporting was fixed in a recent build, but you are correct that these leftover files are not removed via a standard uninstallation.  A removal tool would not remove them either.  In fact, the whole point of having the files randomly named its to prevent such an automated removal script from being able to isolate and remove them.

These are renamed copies of WRKrn.  The best way to deal with this would be to sort the contents of the folder by size.  The ones that all share the same size as WRKrn are most likely copies of WRKrn.  You still want to check.  There is always the possibility of some other important file being the exact same size.  Nothing is worse than wiping out some important files from the drivers directory that you still need.  Your computer would not like that, and you might end up with a non-bootable situation.  The best way to see what it is is to right-click the file and go to Properties.  Take a look at "Digital Signatures," and you should see the file is from Webroot if it is in fact from Webroot.  Make sure you don't delete WRKrn, but the duplicates are safe to delete.

If you're comfortable doing this yourself, that's ok.  Alternatively, support can take care of this for you if you open a support ticket here.

Thx for explanation. I will remove them myself, no problem. To be 100% sure though, may I understand that I can delete all the leftover WSA files which are older than my actual build of WSA ( , i.e. in my case .165) and aren't named WRKrn?

Userlevel 7
From that folder, yes. If there are other files you're curious about that I'm not aware of, you'd need to point them out so I know what you're referencing. But yes, the ones we were discussing are safe to delete.
/// JimM /// /// Former Community Manager - Now Humble Internet Citizen/// /// Also Formerly a Technical Support Escalations Engineer ///

Userlevel 7
Done. Removed totally 134 files counting 13,6 MB. Just to be sure I will keep them in the recycle bin for a while ;)

Userlevel 7
Sorry to bring this up again, but it's been in the back of my mind for a while, and taking another look at this would like to ask if any feature could be implemented (e.g. into the Optimizer?) which would provide an auto-cleanup of these old renamed drivers?
I don't believe it's a solution to expect user to have the patience or expertise to locate and delete these manually...it's too tedious, and in reality they should not still be there, as they are serving no useful purpose (?)....Perhaps one for the Feature Request section? 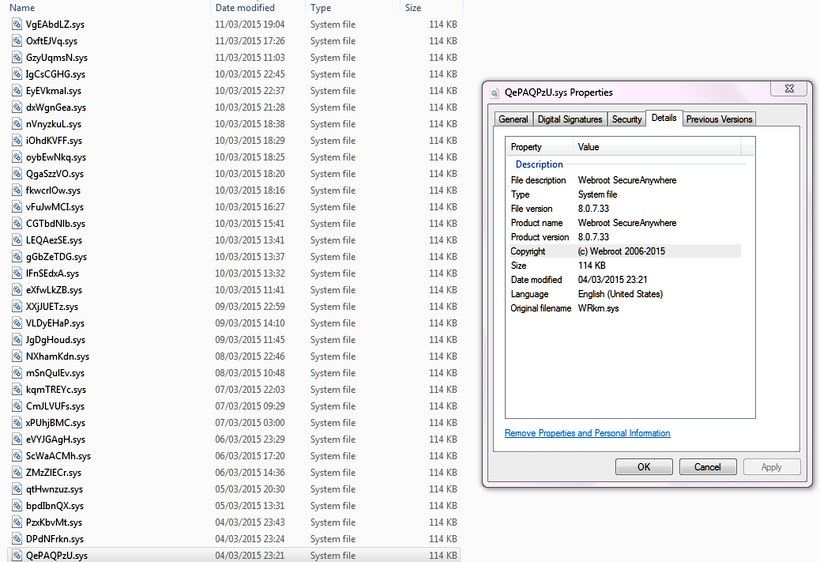 Why don't you open a Feature Request and provide an expose of what you would like and where it might be put, etc?

Userlevel 7
? I will certainly Kudo it if you present it as a Feature Request.  Given that we are also in the Beta, I have a feeling that we end up with more junk than the average user, but still it needs to be cleaned out for everyone.  There is also an issue at the moment regarding language packs for the Password Manager that was discussed a few days ago.
New to the Community? Register now and start posting! "If you don't learn something new every day, you need to pay more attention. I often get my daily learning here so grab a chair and stay a while!" WSA-Complete (Beta PC), WSA Mobile (Android), WSA Business Mobile (Android) WSA-Endpoint (PC- Some of the time.....)

Userlevel 7
Thank you ? and ?  I've posted an effort here

I haven't gone into any great detail in the Feature Request, and any additional comments might help.

David, you might be right about many betas leaving more behind, and hadn't thought of that. Thanks :D