Userlevel 1
I see others have had this problem before me so I've tried all possibilities set forth here such as installing & reinstalling and the like. Performing central analysis is just taking way too long approx 2 hours and change for the total deep scan. Nothing had changed on my system in the last few weeks. No major installs or uninstalls.

Any ideas or solutions would be appreciated before I send in a ticket.
icon

Sorry, , to see you have had no reply to this issue from a Forum Community member. Also did you get a satisfactory response from Webroot Support?

Actually, I encountered this problem about the same time as you, and as I'd never seen this before, I assumed it was a bug that would be sorted out in the next few days. I came back to the issue today and decided to do a test and, lo and behold, I still have the problem.

Here is the data:


It is interesting that this behaviour manifests itself on my 7 and my XP but not on my 10. Could this possibly be a bug associated with Windows 7 and earlier? Or maybe 8 and earlier???

+36
I'm honestly not sure. As you mentioned, support is the best path for getting this resolved. 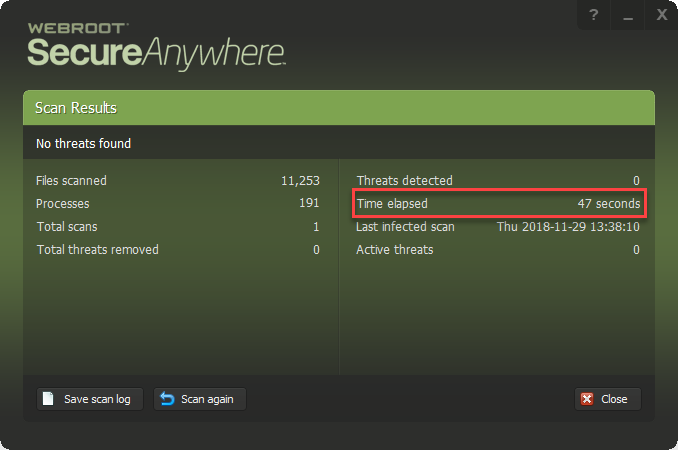 Beta release v9.0.24.49 (released yesterday) appears, on my side at least, to have resolved the problem of long scan times that some of us were encountering and that seemed to begin with the consumer version 9.0.24.37 (released Nov 27th and still current). Hopefully, users encountering this problem of excessively long scan times will see it resolved when this beta version is released to consumer version.