+7
I think I read somewhere that the new Webroot password manager is based on Last Pass.

If true, can existing Last Pass data (vault) be transferred to the Webroot version?

I ask because I currently use Last Pass and would consider using the Webroot version instead.

Userlevel 7
It sure can.  In fact, there are 25 different predefined importation formats that are supported, including generic csv files, which most solutions offer as an export format.

Here's a screenshot of the area you need to use in the toolbar: 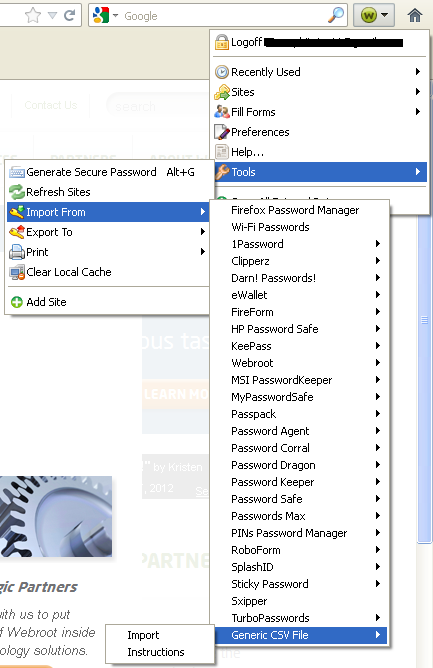 I am also interested in this as a current Lastpass user, can you expand a bit on the answer please.

1.  What about current Lastpass users with a Lastpass database,  can this be migrated to Webroot's licensed version?  I think was the OPs specific question.

2.  Is the Webroot "badged" version kept on the same update schedule as the native Lastpass version.  It is important to have the minimal delay when security fixes or support for new versions of browsers is rolled out in Lastpass.

Glad to see that RoboForm is on Webroots "Import From" List. RoboForm is what I am using now. When the Essentials Licenses change I'll give Webroots Password a try. 😉
 Late 2015 ~ 5K ~ 27 inch iMac ~ macOS Catalina 10.15.7 ~ Clone & Backup with: SuperDuper - Time Machine & iCloud. 
D

+7
In a parallel inquiry to tech support, I got my answer about importing data from LastPass using a CVS file format.

I also learned that Webroot PM will not support a fingerprint reader device which is a must for me.

I am sure that will come in a future version. I'll stick with LastPass for now.

1. Yes, all of your passwords from LastPass can be migrated into Webroot's password toolbar.

2. It's kept on the same schedule for bug-fixes and security enhancements.  That doesn't extend to things like browser support by default, but we do have a toolbar for Chrome coming soon.

Since toolbars can be easily disabled via controls in the browsers themselves, there isn't really any need for that control to exist in WSA itself.  The fingerprint reader suggestion could be placed in our Ideas Exchange.  If a lot of customers want it, we can certainly look at doing that.  Not every feature request turns into a feature, but, so far, 8 of them have.  :)  I'm sure we'd like to know how many people are looking for that functionality, so please feel free to create the idea.
/// JimM /// /// Former Community Manager - Now Humble Internet Citizen/// /// Also Formerly a Technical Support Escalations Engineer ///
D

+7
I am currently using LastPass as my pasword manager and will continue to use it because of its fingerprint reader support.

In Firefox I was able to "remove" the Webroot toolbar from within the browser and am not having any issues.

I think that since Webroot actually uses the LastPass code there are some crossed wires between the two in IE9.

If I am already using a third party password manager, why can't I have the choice to not install the Webroot password manager at all?
Dell Latitude E6430, E6440, 7280 | Windows 10 Pro x64, WSA-AV, Windows Firewall

While I see where you're coming from with the request to remove the toolbar entirely, the issue you're running into shouldn't exist.  I'd like to take a look at this problem for you and see if we can get it taken care of.  I've followed up via the support system, and I look forward to hearing back from you so we can get this issue resolved.  🙂
/// JimM /// /// Former Community Manager - Now Humble Internet Citizen/// /// Also Formerly a Technical Support Escalations Engineer ///
D

+7
Jim, here is the screenshot of the LastPass icon in the Command bar "add button" dialog. Everything went back to normal after I removed another leftover Webroot registry entry and reinstalled LastPass.

Userlevel 7
While I'm glad to hear you got it resolved, I'm also very curious to know what you ended up removing to bring back your command icon for LastPass. I don't suppose you made note of the registry entry you removed before removing it? If you could post it or private message it to me, I can investigate further. Otherwise, if you encounter the issue again, let's take a look at it together.
/// JimM /// /// Former Community Manager - Now Humble Internet Citizen/// /// Also Formerly a Technical Support Escalations Engineer ///
D

+7
Jim, since I can't be without protection, I reinstalled Webroot and voila! the Command bar LastPass icon was replaced by the Webroot icon. This happened without having enabled the Webroot toolbar in Internet Explorer!

I think this is positive proof of the conflict between LastPass and Webroot in Internet Explorer.