+54
This is the beauty of being anonymous and knowing you can probably get away with on-line crimes. With all the news about secret services monitoring all the traffic you would have thought crime would be reduced, but obviously not.

"The year 2014 may well go down in the history books as the year that extortion attacks went mainstream. Fueled largely by the emergence of the anonymous online currency Bitcoin, these modern-day shakedowns are blurring the lines between online and offline fraud, and giving novice computer users a crash course in modern-day cybercrime.

At least four businesses recently reported receiving “Notice of Extortion” letters in the U.S. mail. The letters say the recipient has been targeted for extortion, and threaten a range of negative publicity, vandalism and harassment unless the target agrees to pay a “tribute price” of one bitcoin (currently ~USD $561) by a specified date. According to the letter, that tribute price increases to 3 bitcoins (~$1,683) if the demand isn’t paid on time.
The ransom letters, which appear to be custom written for restaurant owners, threaten businesses with negative online reviews, complaints to the Better Business Bureau, harassing telephone calls, telephone denial-of-service attacks, bomb threats, fraudulent delivery orders, vandalism, and even reports of mercury contamination."

+56
That is crazy!  I can see how it would be hard to combat though.  If you can kill the online reputation of a business then you can pretty much shut it down.

+54
And quite a lot of places will just pay up and then hope the demands will stop which they won't, and then the damage will have been done.

Userlevel 7
Nic is right.. this would be terribly hard to fight.  I agree that most places, unless they are really struggling, are likely to actually consider just paying up and moving on.  The BBB can be a bit difficult to deal with once a complaint is made, and I have seen a number of instances in which a business has gone ahead and provided refund or restitution based on a complaint that really had little or no factual basis.  A high rating with BBB is highly valued, but that also means sometimes businesses will pay for baseless claims to keep it.
New to the Community? Register now and start posting! "If you don't learn something new every day, you need to pay more attention. I often get my daily learning here so grab a chair and stay a while!" WSA-Complete (Beta PC), WSA Mobile (Android), WSA Business Mobile (Android) WSA-Endpoint (PC- Some of the time.....)
R

Userlevel 7
Moved to a Reply to a previous post, this is from a different source on the same topic.  DavidP1970

Businesses are being served printed 'Notice of Extortion' letters demanding Bitcoins to avoid 'severe and irreparable' damage to their reputation.
A handful of US Pizza restaurants have reported the scam to local newspapers, and to Reddit. The letters appear to come from the same extortionist.
The letters demanded payment of one Bitcoin (US$578) within a month or have the fee escalated to three coins (US$1730).
The villains threatened a laundry list of attacks for non-payment ranging from "negative online reviews" and complaints to the US Better Business Bureau, to denial of service attacks against telephones, mercury contamination and various reports to police of false financial crimes and drug production allegedly taking place at the victim business. 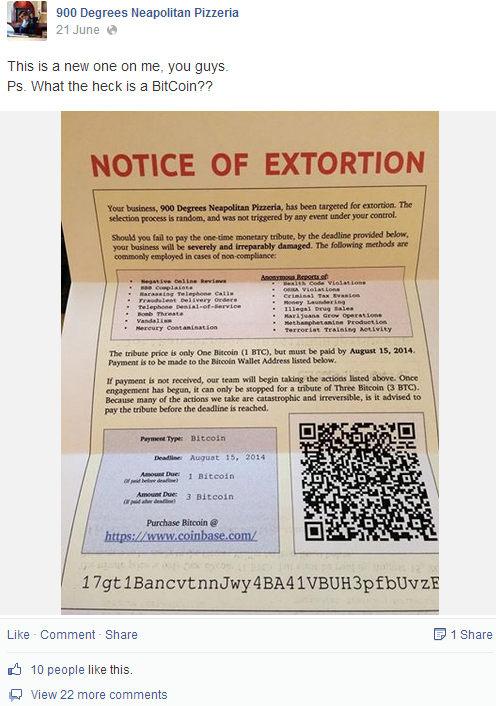 I think it's funny that they call it a notice of extortion, just in case you were unclear of their intentions.

wrote:
I think it's funny that they call it a notice of extortion, just in case you were unclear of their intentions.

Yeah, pretty brazen of them.