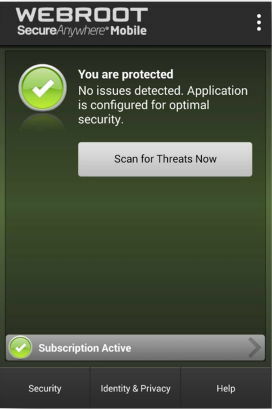 Installation
We installed Webroot SecureAnywhere from the Google Play Store. Once the licence agreement has been accepted, the user has to create a Webroot Account or log in with an existing one. The password for the account has to have at least 6 characters. The product is then registered as a device administrator. Starting the program When the program is first started, an alert in yellow points out that the Android lock screen has not been activated, and the installation of apps from unknown sources is allowed. When both of these problems have been fixed, the status display turns green and makes clear that the product is now protected. An automatic malware scan is also carried out. 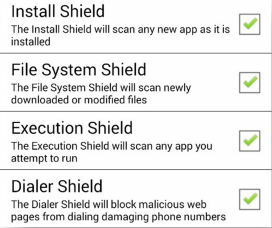 An automatic malware scan is also provided, which can be scheduled to run hourly, daily or weekly. The same applies for updates; these can also be started manually.

Secure Web Browsing
This feature is intended to protect the user when surfing the Internet. If the user believes that a website has been blocked in error, this can be defined as safe, whereby Webroot will not block it any more. In our quick test with Google Chrome, this
functioned very well. 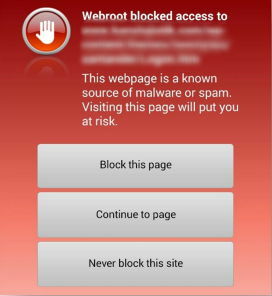 Lost Device Protection
The theft protection can be controlled by text messages or a web interface (https://my.webrootanywhere.com). The latter is graphically well designed and intuitive to use. It also allows the administration of multiple devices from one account. The web interface displays information on the protection status of each device, along with logs for things such as malware detection.

Scream
Text-message command: "scream
<password>"
This function locks the device, and emits a shrill siren. This can be stopped with a simple tap.
Lock
Text-message command: "Lock <password>"
This function locks the device in order to prevent unauthorised access. Although the Android lock screen runs in the background and prevents any attempts to bypass it, Webroot's own lock screen is displayed on top of it. This can include a message for an honest finder, which can be edited in the web interface.
Wipe
Text-message command: "wipe"
<password>"
When the command has been received, the device is locked, and then personal data is deleted. This resets the device to factory settings. On our alternative test device with Android 4.1.2, files on the external SD card were not deleted.
Locate
Text-message command: "Locate
<password>"
This function serves to find the position of a lost or stolen phone. The device is locked in the process. If the web interface is used to send the command, the device's position will be shown on Google Maps. While the software is in the process of finding the device, noother commands can be sent. This could create problems if the locating process takes some time. If a text message is used to send the command, the sender will receive a reply with a link to the relevant co-ordinates on Google Maps.
SIM Lock
This is only available in the premium version. If the registered SIM card is removed, the device will be locked when it restarts. A thief is thus not able to use the device with their own SIM card.
Call & Text Blocking
This component prevents unwanted calls and text messages. The blacklist principle is used. The user can add known troublemakers to a list, which then prevents them making further contact. Numbers can be added manually, or imported from the contacts list, call log or
text-message log. It is also possible to block communications from hidden numbers. Webroot also provides protection against text messages with links to dangerous websites. Calls and texts which have been blocked are shown in a clearly laid-out list. The date and content of the messages can be seen, along with the reasons for blocking them. 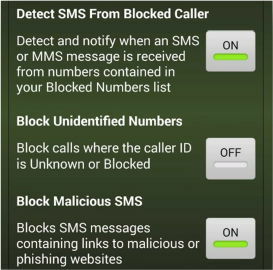 In our test, calls were blocked as intended. Text messages, however, were not. We put this down to incompatibility with Android 4.4; Webroot does not warn the user of this.
Blocking of text messages on our alternative device with Android 4.1.2 worked properly.
App Inspector
The App Inspector checks installed apps for possible breaches of the user's private sphere. Examples would be apps that have access to text messages, or the phone's location function. Tapping a category of risk shows the relevant applications. No further details of the apps are provided, there is just a link to Android's App Manager. 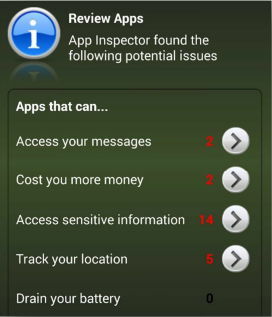 Battery Monitor
The Battery Monitor provides detailed information about the device's battery, such as charge level, temperature and voltage. The bar graph used in last year's version, showing the battery usage of individual apps, could not be found in the current version.
Network Monitor
This displays details of apps that use the network. In each case, the name of the protocol, internal and external IP addresses and ports, and the status, are listed. Tapping an entry conducts a "who-is" search of the IP address, and provides details of the Internet service provider, and the approximate position of the device. 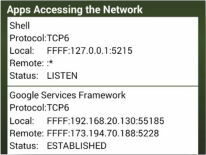 Updates
Updates are carried out automatically. Possible intervals are hourly, daily and weekly. It is also possible to run a manual
update.
Help
Webroot provides a comprehensive help feature for most functions, in the form of a pop-up. An extensive help file is also
available.
Deinstallation
An uninstall wizard is provided to remove the program, which can be done with a single tap. The deinstallation requires the password to be entered, meaning that a thief cannot simply uninstall the theft protection.
Licence
A reduced-functionality version of Webroot SecureAnywhere Mobile can be used free of charge without time limitation. For users who require more functions, the premium version (which includes uninstall protection, SIM lock, Wipe and various app inspectors) can be purchased. This costs €3.68 for a year.
Summary
Webroot's Secure Anywhere performed well in our test. Even the free version offers reliable theft protection and various filters which protect the device well. The uninstall protection, SIM lock and various app inspectors make the premium version an attractive proposition. Although some functions, such as the lock, were exemplary, we still feel that some elements of the theft protection should be improved.