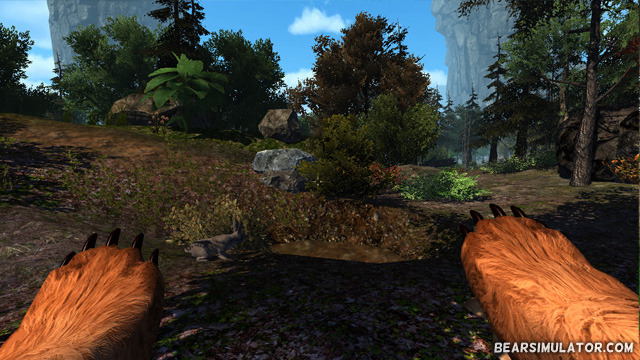 We’ve already had train, European lorry and forklift attendant simulator titles, but the “large machine” branch of this genre has to run out sooner or later. That’s why studios are now turning to animals instead. Coffee Stain are working on Goat Simulator, and now Farjay Studios’ Bear Simulator has reached its Kickstarter funding goal.

Of course it has, it’s going to let yoube a bear. The pitch for Bear Simulator is “like a miniSkyrim, but you’re a bear.” Sold, man. I am sold on that idea.

It’s all in first-person, so unlike Goat Simulator which has opted for third-person, Bear Simulator will give you, at last, a bear’s eye view of the world. Hunt for fish, explore the woods and, er, examine mysterious doors (look, I don’t know, it’s in the trailer.) The game only has alpha footage at the moment, which is why the bear is walking around like a biped rather than on all fours. Apparently the finished title will fix this, but my question is this: does it really need to? I suppose the answer is yes, if it wants to be much of a “simulator.”

This is epic! Thanks for sharing. :D
Mike R Social Media Manager